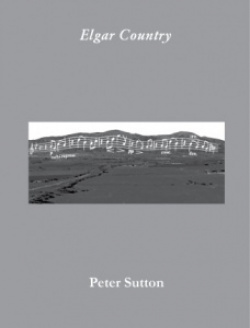 Poet, playwright and translator Peter Sutton is a frequent reader at poetry events in the West Midlands and beyond. His alliterative verse translation of Langland’s 7,500-line medieval poem Piers Plowman was published by McFarland of North Carolina in 2014 and in 2021 he was joint winner of the Kipling Society John McGivering poetry prize. His plays Elgar and Alice and The Prebumptious Mr Punch were premiered in Worcester in 2007 and 2013 and his translation from German of Rolf Hochhuth’s Death of a Hunter was first seen in London in 2018. Elgar Country is Sutton’s homage to the Malvern Hills and to all the musicians and writers who have been inspired by the landscape of this particular area.

A helpful preface summarises the life and work of Sir Edward Elgar who, in addition to music, also acquired a lifelong love of poetry, referring to Langland’s great 14-century poem as his "Bible".

The 27 poems that make up this collection trace Elgar’s life in chronological order, following him from Malvern to Hereford, London and Sussex and then, after the death of his wife Alice in 1920, back to Worcester again. Many of the titles contain references to music, and three relate to statues of the composer which were erected in Malvern, Hereford, and Worcester.

The musical quotation superimposed over a picture of the Malvern Hills is from Elgar’s Enigma Variations and hints at how closely his music is associated with his native landscape and the suggestion that some of his phrasing may have been inspired by the undulations of the hills themselves.

The poems in this volume have a musical quality all of their own. They are, by turn, light and airy and entertaining and also, in places, magisterial. This mirrors some of the different styles found in Elgar’s music: the light and airy ‘Wand of Youth’ Suites or the ‘Nursery Suite’ and the magisterial ‘Pomp and Circumstance’ marches. Something of the childhood magic of his music is felt in Sutton’s ‘Music is Memory’ and ‘Spring Music 1919’. Langland’s vision of Piers the Plowman is closely invoked in ‘The Malvern Hills’ and tribute is paid to Malvern’s reputation as a spa town in ‘Malvern Water’. Sutton focuses on the healing element that is to be found in both the local water and nature itself in his evocative poem ‘The Healing Hills’ where:

amid the modest, mild-mannered shires,

Hereford and Worcester, weathered and warm.

The next stanza lists all the considerable literary connections with the hills: poets, novelists, hymn writers and many, many more leading to the concluding stanza:

So, pack away your pills and potions,

unclean air of every city.

and shrive yourselves of secret ills.

That word ‘shrive’ reminds us, once again, of Langland. Sutton slips it in almost unobtrusively and yet it adds depth to a poem that is already steeped in literary history.

Much of the music in these poems is achieved through alliteration and rhyme. With a nod to the apple orchards of Worcestershire, Sutton remarks that Elgar’s music “poured like cider, fruity, frothy, pippy part-songs” on to the printed page or, in Elgar’s case, the carefully ruled sets of five parallel lines that Alice used to prepare for him to compose upon. In ‘A Poetical Symphony’ Sutton casts his poem into the traditional four movements of a symphony using specialised vocabulary and rhyme to turn it into a sound poem. ‘The Railway’ with its nostalgic litany of station names before the era of Beeching, is reminiscent of Betjeman and also of Flanders and Swann. Its insistent rhythm is evident from the start: "The train still trickles from Worcester to Hereford, / sometimes on time and not seldom behind, / pausing at Malvern and Colwall and Ledbury, / no longer waiting on long ago lines …"

The runaway success in this collection has to be ‘The Worcester Races’ where Sutton throws caution to the winds and comes up with a remarkable tour-de-force whose pace imitates the cadence of the racing commentator. His short, sharp staccato phrases rise and fall with the pitch of excitement brought on by the race:

And it’s First-violin that moves into the lead,

a length ahead of Carillon,

This well-researched collection will delight all those acquainted with the music of Elgar and the literary and musical heritage of the Malvern Hills.

◄ They Race Me In The Streets: Shaun Fallows, Lulu