In the world of her 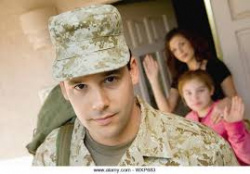 On the threshold she stood,

Of the house where her life smiled.

Waving wildly her small arms at him,

Of whom she was the only child.

Inside sat the lady of the house,

Silencing her sobs and drinking up her tears.

Careful not to let the the happy bird know,

Chasing her was the worst of her fears.

All laiden with arms covered under his coat,

To not let the little one see what he departed for.

And in the heart of his hearts it pained him,

Thinking of those like him he'd be killing in the war.

All of it, yet, to her was just a small trip,

That daddy was going on, to buy her presents.

For she couldn't be told of the ways of a world she hadn't fully seen,

And about the cruel negligence of human sentiments.

Off he went to the battlefield and in she came,

Dancing her way into her little palace.

Starting the countdown for her day of realisation,

When she'd know about feuds brutal and callous.

And now time for months it was.

Her impatience grew with each passing day,

And to her questions no answer seemingly there was.

In the little heart of hers there still remained hope,

Though anticipation of his return grew dimmer.

Until there came a day when a man dropped by,

With nothing to give to them except a letter.

The mother tore open the cover, Of what contained the result of their most impatient wait.

Which, as if, for this day, she'd saved.

What made her ever joyous mother wail.

Little did she know that her only hero was gone,

That of his loving presence she would now be curtailed.

The night went by and so did the other day,

The tears never stopped finding their way out of mother's eyes.

And how intimidating it was to the little soul,

It wasn't long before she finally knew,

That he was gone, leaving her deprived of his love forever.

Her heart received a sudden strong push with a thud,

And a silent darkness spread all over.

She grew up the very moment she realised she had lost him,

There remained nothing more about life and wars to discover.

And she decided there won't be any wars,

In this world, if it would be hers ever.

Wilderness: a thought on urbanisation ►