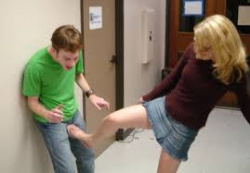 Now I’ve retired I’ve adopted a routine whereby I get all my chores done first thing so the rest of the day’s my own.  This morning, for instance, I’d read-the-paper and had-the-shit so I settled into my shed in front of the log burner, put the coffee machine on and started thinking.

And every argument I had in my head I won by clear philosophical thought.

Now after an hour or so my mind turned to one of the great imponderables; is it more painful for a woman to give birth to a baby or for a man to get a kick in the nuts?

Eventually however, I did solve the conundrum and can announce to you all unequivocally that it is the man who suffers the greater pain.

And here is the proof.

Thankyou and. Happy New Year to the both of you.

I'm sure there's a flaw in this argument, John, but it's not the time to be thinking about it.

The logic seems irrefutable! 😗
Not all calls can be entrancing
That feature balls with painful dancing
And feet that overstep the mark
To find an unwelcome place to park!