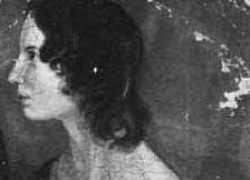 The Friends of the National Libraries (FNL) has successfully raised over £15 million to acquire the Honresfield Library for the nation, it was announced today. The collection includes manuscripts by the Brontës, Jane Austen, Robert Burns and Sir Walter Scott.

A handwritten manuscript of 29 of Emily Bronte’s poems, with pencil corrections by her sister Charlotte, is part of the collection, as well as another mansucript of 10 poems by her sister Anne. Arthur Bell Nicholls, the widower of Charlotte, sold the majority of the surviving Brontë manuscripts in 1895. The collectors and brothers Alfred and William Law, who grew up 20 miles from the Brontë family home in Haworth, then acquired some of the family’s heirlooms, including the manuscript of Emily’s poems.

The Law brothers’ library at Honresfield House disappeared from public view when their nephew and heir Alfred Law died in 1939, and was inaccessible even to academics. Sotheby’s valued the manuscript of 29 poems by Emily at between £800,000 and £1.2m. “It is the most important manuscript by Emily to come to market in a lifetime, and by far the most significant such manuscript to remain in private hands,” said the auction house. “Almost nothing of Emily’s survived – she essentially wrote Wuthering Heights and then parted the world without a trace. There aren’t even really any letters out there by her, as she had no one to correspond with.”

It is the only surviving handwritten manuscript to feature some of Emily’s most famous poems, including ‘No Coward Soul Is Mine’, ‘The Blue Bell’, and ‘The Old Stoic’, and was mentioned by Charlotte in her 1850 preface to Wuthering Heights, when she noted how she “accidentally lighted on a MS volume of verse in my sister Emily’s handwriting. I looked it over, and something more than surprise seized me – a deep conviction that these were not common effusions, nor at all like poetry women generally write. I thought them condensed and terse, vigorous and genuine. To my ear, they had also a peculiar music – melancholy, and elevating.”

As well as her classic novel Wuthering Heights, Emily also published a book of poetry with her sisters Charlotte and Anne titled Poems by Currer, Ellis and Acton Bell. She died in 1848 at the age of 30.

The Honresfield Library was formed towards the end of the 19th century by William Law (1836-1901), a Rochdale mill owner, who created an exceptional collection of English and Scottish manuscripts and printed books that had the Brontës at its heart, as well as manuscripts in the hands of Jane Austen, Robert Burns and Sir Walter Scott and a significant collection of printed books. It has been largely inaccessible for the last 80 years.

When the sale of the library in three tranches was announced in May 2021, Friends of the National Libraries successfully encouraged Sotheby’s, the agents for the vendors, to postpone the sale of the first tranche planned for July 2021 in order to give FNL the opportunity to purchase the entire collection outright on behalf of appropriate recipient libraries within the UK.

FNL has successfully raised £15.3 million, of which the purchase price is £15 million, and the balance is a combination of VAT and fees. FNL’s success has ensured that the collection will remain permanently in the public domain and will never be lost to overseas institutions or to private collections that are not accessible to the public.

FNL, and its consortium of libraries and writers’ houses, said it was “profoundly grateful to our lead donor Sir Leonard Blavatnik who has, with exceptional munificence, match-funded the sum raised by FNL and the consortium institutions. He has donated half the purchase price. In recognition of his great generosity, the collection will henceforth be known as the Blavatnik Honresfield Library. It is an extraordinary donation, the largest ever given to the UK  by an individual for a literary treasure, safeguarding for the nation the most significant collection of manuscripts and books at risk of dispersal for many decades.”

FNL added that the acquisition has also been made possible thanks to “the vital and generous support of the National Heritage Memorial Fund (NHMF). The NHMF’s grant of £4 million is the largest it has ever awarded towards the acquisition of literary manuscripts since its foundation in 1980.”