Never mind the rugby, the planes, or even the literature festival: grassroots voices put Richmond upon Thames on the poetry map 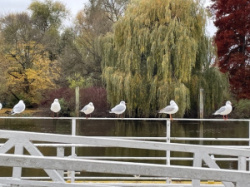 To be fair, the rugby fans didn’t turn a hair when they encountered a group of poets beside the river Thames in Richmond while they were heading from the pub to nearby Twickenham. On the other hand, they didn’t break their stride. The poets, including myself, were from Poetry Performance in Teddington, a regular open-mic night which has run on Zoom during lockdown - and still does – but has now ventured back to its old stamping ground, upstairs at the Adelaide pub, as well.

We only not clashed with the England v South Africa match, but with the closing events of Richmond literature festival. Our walk around local landmarks was not on the festival bill, not even on its outer fringe. Perhaps it should have been?

No matter. The walk started outside Richmond theatre, where a few poems were read, crossed the town’s expansive green, surrounded by historic and attractive houses, before stopping by a gatehouse which is all that remains of Richmond Palace, torn down brick by brick after the execution of Charles I. More poems were read, packed with interesting details about the old palace – the great fire, and the fact that Henry VII and Elizabeth I both slept and died there – with pauses while descending planes trundled over our heads. 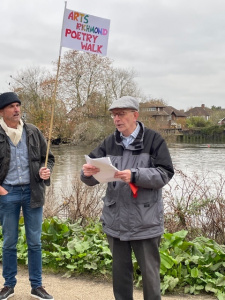 A Georgian estate, original and imitation, remains, in place of the palace. The buildings are quite perilously close to the Thames, which does flood at moments of high tide. They also nestle under a flight path on the approach of Heathrow.

This poetry walk had been prepared for with a preliminary one, back in the warmth of an early October Sunday afternoon, where some such as myself learned about Richmond Palace, and the nearby railway bridge over the Thames – cast-iron, completed in 1848, later rebuilt using steel - for the first time. 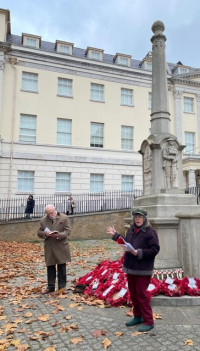 On Saturday we also had poems about Turner’s connection with Richmond – ‘England: Richmond Hill, on the Prince Regent’s Birthday’ and ‘The Thames from Richmond Hill’. More poems were read along the riverside, and at the war memorial, especially by Poetry Performance member Carol Wain, whose father Flight Lieutenant Denis Hornsey published a book about his wartime RAF exploits – he was shot down during a bombing raid on Germany - which included a number of poignant and heartfelt poems he had written. 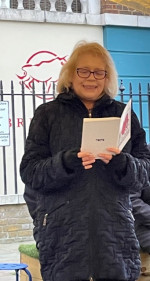 There were more, concluding poems in the market area above the river at Whittaker Square, where walk compere Ian Lee-Dolphin rounded off the event with a couple of songs on the guitar – one about posh markets, and another, ‘The Streets of Richmond’, with more than a nod to Ralph McTell but also to the poets who had taken part in the walk, and to those no longer with us but whose poems had been read along the way – Bob Sheed, Frances White, and Judith Blakemore Lawton.

The walk had been organised by Poetry Performance’s marvellous and tireless Anne Warrington, who in recent years has also pulled together events to mark the 1918 Armistice centenary, and the 75th anniversary of VE Day, the latter unfortunately mothballed because of the pandemic. 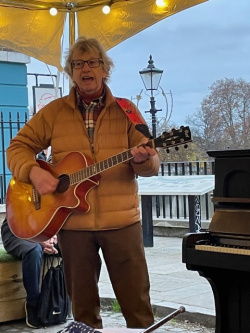 The other poets that took part were Sharron Green, Connaire Kensit, Ken Mason, Tony Josolyne, Heather Montford, Stephen Harman, Robin Clarke, Barbara Lee, Patricia Cammish, Bob Kimmerling,  Keith Wait, and Heather Moulson, pictured left, and myself. My wife Gillian also read a couple of Judith’s poems. We arrived somewhat breathlessly, catching up with the walk after it had already started after we had been ensnared in Saturday traffic. We were assisted in finding our fellow poets on the far side of the green by the flags specially made by Pat Cammish’s  grandchildren for the event.

I think it’s quite fair  – if it’s not too off-putting – to say that our poetry walk was an exercise in ‘psychogeography’, which has been described as “a way to delve into the soul of a place”. It also demonstrated the sheer conviviality and communality of grassroots poetry. It was great fun being out in the open air, with fellow poets, delivering the poetry of place. Just up our street.

And our audience? Very attentive, if you count the gulls lined up on moored boats near the Thames slipway, two herons with their private box, Egyptian and Canada geese (the latter a bit noisy at times), plus the odd mandarin duck, and even the cormorants arrayed in the branches of a tree on the far bank.

The event’s official title was ‘The Gathering – poets on the move’, and was organised with Be Richmond, aka the Richmond Business Improvement District – although you wouldn’t think you have to do much to improve on Richmond, as Turner found in the past.

Fireworks and fiery words at Spoaken Word in Lewes ►

Having played rugby (under duress) at school, I am still ignorant
of the difference between RU and RL. But in all fairness, I didn't notice any mention of either in this rather entertaining post-event description....just the word "rugby" to accommodate the passing interest, no doubt.

Sounds rather inspiring Greg! The Autumn is a nice time for reflections of all kinds. Unfortunately, we travelled via Sandown Park to visit my nephew last night who lives in Teddington, and we were well stuck in traffic for about three miles due to the rugby! (The royal parks have now closed Bushey Park to through traffic so we had to crawl to Kingston Bridge overtaken by smug cyclists! On the way home M3 there was a massive hold up on the smart motorway due to an accident. Happy days. Good to see live poetry going on again.

Sorry for offending any northern sensibilities, Ian! Not intended, of course. Thanks for reading, mate.

the 'rugby' to which you refer is 'rugby union' despite southern bias it's not the only, nor even the best, 'rugby' played in this country. That, of course, would be 'rugby league' ?