Fireworks and fiery words at Spoaken Word in Lewes 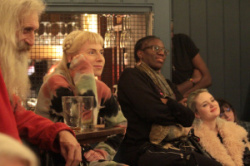 It’s hard to beat Janine Booth as an experienced organiser and MC. The Marxist, trade unionist and socialist-feminist has been around as a poet since the 1980s, when she was one of the ranters who braved music gigs to distract fans between acts with often political poetry. In those days she was known as The Big J. She’s still a very political poet – and Bertie Booster knows, there’s plenty of material around these days.

Janine has also moved down from London to Lewes, which she describes as “the cultural epicentre of East Sussex”, and set up an open-mic night called Spoaken Word at the Royal Oak pub. Social distancing or no, on its third night on Sunday there weren't enough chairs for the crowd that arrived. 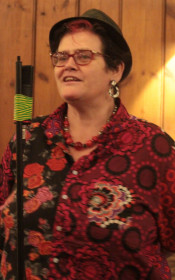 Many of us would argue that we are literally as well as metaphorically up a certain creek, with Tory MPs apparently wanting to engulf us in sewage, for some reason that is hard to explain, even for them – and Janine kicked off proceedings with an amusing and skilful call to “floating voters” to protest at the way that “building up the affluent builds effluence up, too”. At the start of lockdown she was probably the first to produce an anthology of Covid poems, which included her own, resounding ‘Wherefore Art Thou, Capitalism?’, reprised at the Royal Oak on Sunday night. 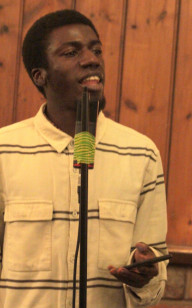 Lewes is a town with its own anti-establishment traditions, paraded only two nights earlier at the annual, spectacular Bonfire Night, with topical political effigies that are marched around the streets and then consigned to the flames.

Spoaken Word’s guest poet, The Repeat Beat Poet, reflected this with some angry poems such as ‘How to Save the British Dream, a step-by-step guide’: “Sanitise history with doctored textbooks and stolen traditions … let a white Jesus forgive all your sins.” Another poem told how “overseas Britain ruled, using black bodies as fuel”.

He also has a poem about the short-lived, and already almost forgotten reign of Theresa May as prime minister: “Beware the vicar’s daughter … beware the snooper’s charter, and that slightly soulless laughter … beware your apathy, that has the smell of privilege to me.”

The best political poetry is reinforced by powerful and effective rhymes, it seemed on Sunday night. The Repeat Beat poet – aka Peter de Graft-Johnson (PJ), co-founder of the hip hop open mic night Penting, creator of spoken word radio show #TheRepeatBeatBroadcast, and host of Lunar Poetry Podcast  - also has a poem called ‘For the Poets and the Faithful’ which praises and celebrates all the open-micers out there, “the rhyme flingers and the word slingers, for the pens and microphones gripped between fingers”. He opened his set with that one at Lewes. 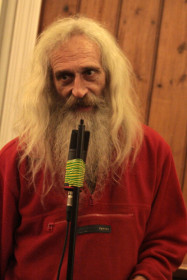 And why not? We had a powerful mix of the angry, the poignant, the confessional, and the amazing, as well as the political. Adrian Figgess had moved from Brighton along the south coast to Seaford, and found himself charmed by his new abode. He also had kind words to say about the Yorkshire town of Whitby as well. Louise Taylor is an experienced poet of comedy, with a cutting line about “wrinkly winkle-pickers” and another poem delivered by an alter ego named Iona Jette and an accent pinpointed “within the circulation area of the Aberdeen Press & Journal”. Fred the Ninja, pictured right, a poet with presence, delivered a series of terse and enigmatic contributions.

I was delighted to help out an old Poetry School chum, John White, on one of his poems, and to have my own five-minute slot as well – a prelude to a guest poet appearance at Spoaken Word on 2 January, 2022. The bar has already been set dauntingly high by previous guests Attila the Stockbroker, Susan Evans, and The Repeat Beat Poet. At the end Janine said: “I wasn’t sure this was going to take off, but I think it has!” She plans an anthology next year.

One other thing. There is a rather bizarre, multi-hued portrait of a smiling Queen adorning the walls of the upstairs function room of the Royal Oak. The Repeat Beat Poet professed to feeling a tad unnerved by her psychedelic gaze. But I reckon Her Maj could not fail to have been amused and entertained by the proceedings. What do you think, readers?

◄ Never mind the rugby, the planes, or even the literature festival: grassroots voices put Richmond upon Thames on the poetry map

'I need you like the earth needed the flood after dearth' ►

Thanks for your comments, David, and for the namechecks of those younger open-micers. And you are absolutely right, too.

Everything you say is true. I was impressed by the younger free-mikers, Marcia, Emma, Ellie Kofi, Luciid, and others, brave enough to put their feelings into poetry and to confess their confusions and sentiments to strangers, appealing equally to mind and heart and producing laughter and tears. These are the real poets in residence in Brighton and East Sussex.
But most impressive was the sympathetic, supportive and enthusiastic audience who willed them to succeed.
This event is bound to flourish.
David.