'I didn't want it to be too clever': satirist Armando Iannucci's mock-heroic poem about pandemic 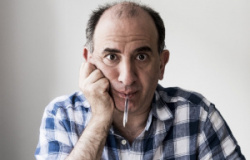 Satirist Armanda Iannucci has published a mock-heroic poem called Pandemonium about the Covid pandemic, in the style of Milton’s Paradise Lost. Talking on the BBC’s Front Row Radio 4 programme, Iannucci said Milton had invented the word ‘pandemonium’ for his epic poem, to describe the sulphurous, fiery pit where Satan presides.

Iannucci said his poem had been written “out of anger and sadness” during lockdown. He added that he often wrote poetry “as a private thing … I find it therapeutic. I like moving words around.”

In Pandemonium – subtitled Some verses on the Current Predicament - Boris Johnson is portrayed as Orbis Rex, “World King by birth and plan”, who rides out “to fight sadness with mirth”. Health advisers Chris Whitty and Patrick Vallance are described as two magnificent angels, who stand either side of him, and who flesh out his words “so they make more digestible sense”. Johnson’s former adviser Dominic Cummings is seen as a blind prophet. The book also includes illustrations by cartoonist Andy Riley.

Iannucci said his own family had experienced “having to say goodbye to someone on Facetime”. He added of his epic poem: “I didn’t want it to be too clever … I wanted it to be clear.”