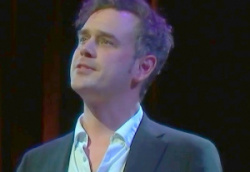 Luke Kennard has won this year’s £10,000 Forward prize for best collection for Notes on the Sonnets (Penned in the Margins), a collection of responses to Shakespeare’s 154 sonnets, which he described on the stage at the Forward readings on Sunday night as “essentially an act of insolence”. He has also described them as “a strange, dreamlike narrative set at the same house party”’ where he began writing the sequence. Kennard, born in Kingston-upon-Thames, was visibly emotional at the Southbank Centre when he learned of his award. He said: “I feel like there must have been some mistake … thanks very much to the judges for liking this weird book.”

This "weird book" is described by its publisher as "a series of anarchic prose poems set in the same joyless house party. A physicist explains dark matter in the kitchen. A crying man is consoled by a Sigmund Freud action figure. An out-of-hours doctor sells phials of dark red liquid from a briefcase. Someone takes out a guitar. Wry, insolent and self-eviscerating, Notes on the Sonnets riddles the Bard with the anxieties of the modern age, bringing Kennard’s affectionate critique to subjects as various as love, marriage, God, metaphysics and a sad horse."

On a night that marked the 30th year of Forward awards – which began, as Forward founder William Sieghart informed the audience, in “a smoky bar in Soho” - Nigerian-born Caleb Femi won the Felix Dennis prize for best first collection with Poor (Penguin Poetry). Chair of judges James Naughtie described it as a “kind of love song to black youth culture”. Femi was London’s first Young People’s Laureate. He is a film-maker and photographer as well as a poet, and his own photos – of the places and faces of the North Peckham Estate  – are included in the pages of Poor.

Femi describes his poetry as “an endeavour to articulate the lives and times of my community of North Peckham”, including the murdered schoolboy Damilola Taylor, whom Femi knew, and to whom one of the central poems in the collection, ‘How to Pronounce: Peckham’, is dedicated.

Nicole Sealey won the prize for best single poem for ‘Pages 22-29, An excerpt from The Ferguson Report: An Erasure’, first published in Poetry London magazine. She began making erasures from the United States Department of Justice’s 2015 report detailing bias policing and court practices in the city of Ferguson, Missouri, three years after the murder of Michael Brown by Ferguson police: her shortlisted poem is an excerpt from this much longer work. After receiving her award she said: “Here’s hoping that one day soon … there will no such inhumanity on which to draw.”

Forward prizes founder William Sieghart told the audience at the start of the evening that millions had sought out poetry as a way of coping with loss and trauma during the pandemic: "There are times when poetry is the only place to turn."

◄ 'I didn't want it to be too clever': satirist Armando Iannucci's mock-heroic poem about pandemic