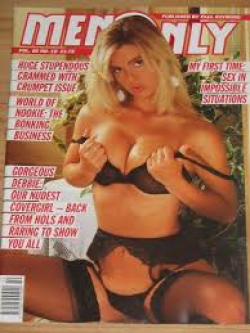 Dear Fiona Millicent, I write about an incident

Which happened on a golfing holiday I took in Troon

I’d mentioned to the hotel staff

The unmade bed, the dirty bath

So shortly after that I let the cleaner in the room.

I’d guess her age about 18; she looked a star of stage or screen

Her blouse was full to bursting and she’d legs up to the hilt;

She tidied round with mop and broom

She cleaned the bath, the sink, the room;

She bent across my king-sized bed and straightened up the quilt;

Image my surprise when she lifted up her kilt.

To talk of my experiences few and far between;

But I was shopping at my butcher’s

And I’d bought about as much as

I needed when the butcher’s boy eyed me very keen

He asked me out so sweetly that I felt just like a queen.

He picked me up dead sharp at 8

And for a treat on our first date

He took me to the pictures in a little town called Leith;

The film was called “All Hands on Deck”

We said that from this boredom we would both need some relief;

Imagine my surprise when he offered me his beef.

Please let me share my story of our vicar and his wife;

Moving lately to our parish

Came the vicar and wife, Alice,

Who invited me for card games at the vicarage in Fife;

She’d worked in Ayr casino and was sharper than a knife.

We played a hand or two of whist, “Just for matchsticks,” he’d insist;

She shuffled cards so dextrously, with certainty of touch

But dealt the last card in my lap

I put it down to nervousness – an accident as such.

Imagine my surprise when his hand dropped to my crotch.

Of matters of the flesh since I come from Tunbridge Wells

But beauty far beyond mere speech

Appeared to me upon the beach

Bedecked in pink and purple reins and tinkliest of bells;

The sweetest donkey ever on the sands of Ingoldmells.

It was the prettiest I’ve seen, its coat a luscious, golden sheen

I dropped my coin into the sand

(Which, truly, was not what I’d planned)

The donkey got quite frisky and its plonker grew in size

As I bent to pick the pound up – well, imagine my surprise.

◄ STORMING OFF IN A SHITTY

A VIEW FROM THE HOT SEAT ►

Remind me when we’re next at Well Spoken, Kevin. I’ll try to remember to bring it along.

Ha.
This was the very first poem I heard you perform. I never attempted one of my own that month, because I knew that I couldn't follow that.
It's still my favourite, and it's the one that I requested you do when our Jonny attended well spoken.
Maybe we'll get a repeat next month.

Ps Gladys Thrupp, may be making a reappearance

Don’t know the town, Stephen. I’ve never been. But there is something innately funny about Tunbridge Wells.
And thanks for the Like, Stephen A.

I could never confuse her with the late Mary Millington, Leon. Fiona Richmond was the daughter of a vicar and was altogether more softer core. She was the Shagony Aunt for Men Only..
https://en.m.wikipedia.org/wiki/Fiona_Richmond

John you may have been confusing Mary Millington