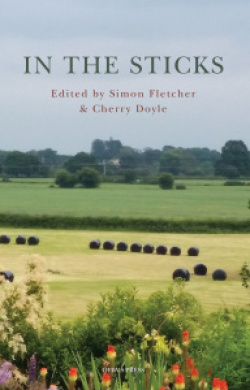 This anthology of hard-hitting rural poetry from Shropshire-based Offa’s Press began as a series of online regional workshops - and made me wonder where the term “in the sticks” originally comes from. Apparently it is American, and it certainly has a derogatory, if not dismissive tone. But in today’s world of the internet and the pandemic, with people fleeing cities and working from homes in the countryside, does that still apply?

At any rate, there is a lot of anger in these poems, edited by Offa’s Press publisher and poet Simon Fletcher, and poet Cherry Doyle. Peter Branson kicks it off in fine style with ‘Our Commonweal’, a fierce attack on the privilege and property still retained by the aristocracy:

It’s brass neck keeps the riffraff out these days,

a third of Britain owned by aristos,

fifteen per cent devoted to the grouse

I have no idea about the veracity of these statistics, but they sound right. And morally entirely wrong. We must be a nation of lunatics, to have put up with this for so long.

Jenna Plewes provides a different picture, of those that work hard in the countryside, in ‘A Day in January – a sequence’, in which she catalogues the tough farming tasks in an unforgiving month, with rain forecast all day, and contrasts this in the final stanza with the same scene viewed from a train window. There are also tough, if not brutal poems about lambing in the anthology, such as ‘Setting On’ (Jack Bigglestone) and ‘February Smells of Blood …’ (Elizabeth Parkes).

Meanwhile rural anger has other targets. ‘The Developers’ by Janet Jenkins is about the paving over of green fields, and adding insult to injury by giving their residential roads bucolic names, based on the habitat they have destroyed … “Bilberry Chase, Greenwood Valley, Meadow Way”.

And then there is the sound of guns in the countryside. Ros Woolner’s ‘Recoil’ lures you in with two stanzas of delightful natural observations, before the mood changes with the sight of a “man crouches by the path / black T-shirt, joggers, shotgun”. The final stanza’s images are quite different: “half-cocked”, “unexploded”, “barbed”, and “primed”.  Similar disgust is expressed in ‘Shattered’ (Rosina Trotman) and ‘The Shooting Party’ (Paul Harvey).

But rest assured that this anthology also includes poems about the values and enduring appeal of the countryside. Simon Fletcher’s ‘The Blossom Forecast’ lifts the spirits, and ‘What The Hawthorn Offers’ is a passionate paean to nature, to which John Sewell commits his soul and even his bodily remains.

That delightful river bird the dipper appears in more than one poem, including Bo Crowder’s ‘Fly Fishing in Dovedale’: “A dipper preaches on a rock, takes our confession / then bobs a bow and dives, shows how it’s done”.

‘Future Forests’ by Nicky Hetherington promises hope for the future in this portrait of an acorn, conker, hazelnut gatherer, nurturing her finds in her own garden.

But ‘Barn Conversion’ is an account of the hazards of being a rural official dealing with a recalcitrant property applicant:

He wouldn’t invite me in,

not after my fuss over the mullions torn out one day

to double-glaze his lounge. It was saying –

though technically he owned the place, he was

only its guardian – that put him into orbit.

Thus this valuable and enjoyable anthology strikes a balance – rightly, in my view – between listing the glories of the countryside, and enumerating the many tensions and threats to our continuing enjoyment of it. People, eh? They always seem to be the problem, don’t they?

The "aristos" haven't had it all their own way. Indeed, Bill Bryson
reports an estimate of some 2000 stately homes being lost in
the past,.through the imposition of taxes and other unsustainable financial demands. Much of what is under rural threat now has
been preserved through the efforts of those who had struggled
to maintain what had been inherited, an often onerous and
thankless "family duty" for many. But the fabric of the countryside would be that much meaner without the visible
(and commercially popular) existence of their scattered successes.