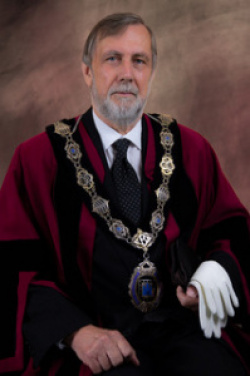 A poet who has published two pamphlets, twice been nominated for the Forward Best Single Poem prize, and is a member of Ver Poets and a regular at Write Out Loud Woking, has now become mayor of Berkhamsted, birthplace of the novelist Graham Greene.

Stephen Claughton, who also reviews regularly for the online quarterly London Grip, said that he became involved politics in 2016, following the EU referendum, and Donald Trump’s election in the US.

He said: “It seemed clear to me — and a lot of other people — that rightwing populism, with the divisions it stokes, was leading us into very dangerous territory and I was struck by the much-used quote, attributed to Edmund Burke, that the only thing necessary for evil to triumph was for good men to do nothing. Not that I regard myself as being a particularly good person, but I do believe in rational argument, verifiable facts and the rule of law.”

He has campaigned in six elections for the Liberal Democrats (“Labour don’t do well in our area”) and in the 2019 local elections was elected to Dacorum borough council and Berkhamsted town council. In May this year, he became the town mayor for 2021-22.

Stephen conceded that “you enter politics with grand ideas about helping to save liberal democracy only to find yourself being involved in arguments about whether the local school should be allowed to install bollard lights along the driveway to its playing field car park, or how many parking spaces there should be in the high street.”

But he added: “It’s the local issues that matter most to people in their day-to-day lives and there’s a lot of work to be done currently in fighting the planning changes being introduced by a party that gets a quarter of its funding from property donors.

“That said, the mayor’s role is largely representational, although I do chair meetings of the town council. I don’t think that Berkhamsted is ready yet for any mayoral poetry events, but I’ll be supporting the 2021 Graham Greene International Festival both as mayor and as a trustee of the Graham Greene Birthplace Trust, on which I’m the council’s representative.”

Save the dormouse and other endangered creatures ►