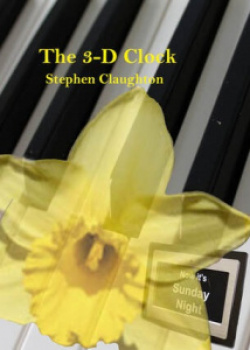 This short collection of 16 poems is an often entertaining look at an otherwise extremely painful subject that has touched, or will touch, most of our lives. It is quite a feat to write amusing poems about dementia, but Stephen Claughton manages this difficult trick. The poems, dedicated to the memory of his mother, Beryl Mai Claughton, who died in her 90s, begin with a Welsh male voice choir that apparently follows her around (‘Musical Ear’):

The problem was you couldn’t make them stop.

Instead you tried drowning them out,

la-la-la-ing at the top of your voice,

just you versus all those men.

There is the often heartbreaking moment when a closes relative no longer knows exactly who you are: “Perhaps there have always been two - / the person I think I am / and the one you complain about.” (‘The Double’). In this poem Claughton finds himself, through his mother’s misperceptions, re-examining his relationship with her. That happens again in ‘Nonage’, when the poet reflects: “Only now that you’ve lost your grip / on things in general, / do I know what it’s like to be free.”

There is the clearing of a home she no longer remembers, emptying it of “a lifetime’s worth of junk, / stuff we didn’t want, / things you’d forgotten you had, / before the forgetting began.” (‘Home’).  The modern-day digital gadgets intended to make life simpler, but which bemuse the old, and the not so old, too (‘Home Entertainment’). The collection’s title poem continues on that theme with a device to help the confused elderly keep track of time, which his mother has no patience with.

The inability to find the right word, which many of us fear and look for as an early sign of decline in ourselves, is addressed in ‘Anomia’:

We don’t need words for it,

this thing that’s bothering you;

we both know what it means.

‘Con Moto’ finds mother at the piano, practising driving with her feet on the piano pedals, while her son reflects ruefully on how she continued driving into her 80s:

Nothing could dent your resolve.

Wing mirrors in the end

the same as touch-up paint.

as we came to a busy junction,

“what happens at roundabouts.”

No arguing, you were grounded after that.

For many years she had left titbits from the Times - on etiquette, or on health - on his voicemail. Later she rang up but only left silences: “I stopped listening years ago. / Only now you’ve nothing to say / do I strain to hear everything.” (‘Voicemail’).

There is also a poem on the superstition of death. ‘Opening the Window The Night You Died’ recalls a moment for me at my own father’s deathbed. It was a warm day in August, the hospital window was already open, and it was easy to pretend or imagine that the essence of him had escaped through it. In truth, it was difficult not to.

This is the kind of poem that provides recognition to those who have been through the same thing, and consolation, as does this whole collection. Maybe it has something to do with Stephen Claughton’s former career as a civil servant, but these poems are remarkable for their clarity and lucidity. I would recommend this warm and humane collection as a gift, if you think the recipient would appreciate it, that might help carers and relatives through this very challenging passage of life.

◄ 'As if what exists, exists so that it can be lost and become precious'

'Any diversion from fear, which is in itself a disease' ►