Deadline nears for Foyle Young Poets of the Year award 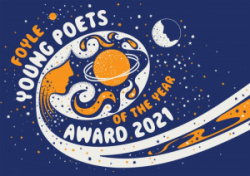 The 31 July deadline is nearing for entering the Poetry Society’s Foyle Young Poets of the Year award. It is free to enter and is open to poets aged 11-17 anywhere in the world.

Meanwhile it has been announced that this year’s patrons for the award are musician and poet Arlo Parks and writer, comedian and actor and musician Ben Bailey Smith.

Arlo Parks’ debut album Collapsed in Sunbeams reached number three on the UK albums chart. In May this year she won the Brit award for breakthrough artist. She said: “Poetry for me was always a safe space with no rules where I could trust my intuition and describe the world through my singular lens. It’s often seen as an art form that is inaccessible or opaque and that’s why I’m so excited to be a part of these awards. These awards are an opportunity to bring young people to poetry, allowing them to flex their creative muscles and be completely themselves.”

Ben Bailey Smith began his career in rap, and has since gone on to star in Law and Order, The Inbetweeners, Miranda, Brief Encounters and more. He has a huge following among children, having written for CBBC, while his children’s books, I am Bear and Bear Moves, have been critically acclaimed. He said: “The first book of poetry I remember loving was Brian Patten’s Gargling with Jelly. I was about seven years old and I carried this slim volume packed with laugh out loud silly rhymes everywhere, to the point that pages started to fall out. I wasn’t even upset because by that time I knew the poems off by heart anyway.

“It’s only now that I look back and think that was maybe the first time I grasped the understanding that words – simply organised in a funny, memorable way – could have profound power, could bring profound joy. Poetry has stayed with me ever since and now I write my own poems for children, not even for work but for fun! To be a patron of the Young People’s Poetry Award is a true honour, and to help kids find inspiration and confidence in their own writing ability brings me huge satisfaction.”

◄ 'Lost in a foaming green crawl, I grew smaller than me'

The Earth is a Bookcase: Beth O'Brien, Black Pear Press ►

There are competitions for the older poet, since you ask, MC. The King Lear prizes, for instance, are just about to announce this year's winners, but hopefully they will be running again next year. https://www.kinglearprizes.org.uk/

Was it GBS who observed that youth is wasted on the young?
The ring is rung - the fling is flung
When age-wise you're no longer young;
It can happen before you know it
So how about "The Foyle Old Fogey Poet"? ?