The Earth is a Bookcase: Beth O'Brien, Black Pear Press 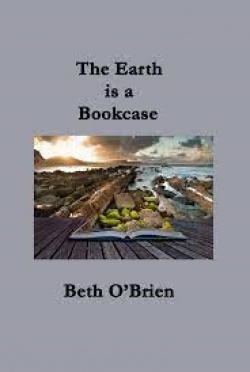 Writer, editor and reviewer Beth O’Brien is the author of two previous collections of poetry: Light Perception (2019) and I Left the Room Burning (2021), both published by Wild Pressed Books. Her latest collection came into being during the summer of 2020 when she was invited to undertake a remote internship at the Lapworth Museum of Geology, one of the oldest geology museums in the UK, to create written content for their first souvenir guidebook. Run by the University of Birmingham, the museum is named after the geologist Charles Lapworth (1842-1920). The museum houses the finest and most extensive collection of fossils, minerals and rocks found in the region.

As O’Brien began to research the museum’s collections, she started to write poems inspired by the objects and the geologists that worked among them. In her preface she says: “As a non-geologist, I could not help but be gripped by this version of the Earth’s history. Not only in the many changes and alterations the Earth has endured, the extinctions and disasters it has witnessed, but by the people who have found a way to uncover this history.”

The 30 poems in this collection offer up a poetic take on meteorites, minerals, and fossils.  O’Brien brings these subjects alive with poems about a spider that could not spin a web, a lead ingot found in Shropshire stamped with the mark of the Roman emperor Hadrian, the Portland screw snail and an ant encased in amber. Fascinating facts are provided as footnotes. I wonder how many of us know that 428 million years ago, the West Midlands lay south of the equator and was covered by warm shallow seas with a climate similar to that of the Bahamas - or that Professor John Milne and Joseph Shaw invented a seismograph which became the standard earthquake recording instrument in 1913? O’Brien tells us that it was assembled in Shaw’s greenhouse in Bromsgrove, made from parts of an old clock and bike frame, a Hudson’s soapbox, and a Tate and Lyle treacle tin.

O’Brien’s poems not only tell us stories about the exhibits, they also reveal a lot about gender discrimination in academia. Viewed through a feminist lens, they are searing in their condemnation of injustice. It seems inconceivable in this day and age that it was not until 1920 that Oxford University allowed women to be awarded degrees, and that Cambridge University only allowed women to gain degrees in 1948. Several of O’Brien’s poems highlight the work of pioneering women geologists such as Ethel Wood, for her monograph on British graptolites and the Scottish geologist Maria Matilda Ogilvie Gordon for her work on corals. In other poems, O’Brien writes about the working conditions of women in Cradley Heath who were barely paid to make chains in makeshift forgeries in their own homes, and Black Country women who were paid a pittance to pick out the ironstone and any coal that they could find from material extracted from the mines. Even when no particular person, or the role that they played, is specified, O’Brien has a subtle way of highlighting discriminatory practices without going so far as to actually name them. They are there, seething beneath the surface:

They say you can see right through me

and I always get confused as to whether this means

I’m invisible, or a subconscious over-sharer.

I’m kept in the dark on a lot of things,

for the dark preserves things better

and these days, transparency is rare.

(‘Proustite | Invisible in the Dark’)

Some of the titles of O’Brien’s poems have echoes of idiomatic sayings or popular songs: ‘Snakes and Stones’ is reminiscent of ‘sticks and stones’ and ‘Wishing on a Meteorite’ calls to mind ‘Wishing on a Star’. Many of her poems are short which adds to their concentration of power. The strong last line is one of her many strengths. This is particularly evident in ‘Grouping Corals’, ‘I Told You So’, and ‘An Ant in Amber’.

‘Trackways’ is a good illustration of O’Brien’s gift for concision. She packs a lot of information into nine lines while at the same time managing to convey it in a relaxed, almost conversational style:

and look for the way back

to a time when dragging your tail

it made you interesting –

and I jot this down as a note

on the evolution of body standards.

Again, a helpful footnote adds flesh to the bone: “Animal trackways from Alverly make up an extensive, criss-crossing, mass of footprints and tail impressions from a variety of animals. Geologists have used these to work out how fast these creatures were travelling.”

This is a very thoughtful, well-structured collection of poems that tells us a great deal about our society as well as our landscape. O’Brien has mined her source material well and has come up with some real poetic gems. Fully recommended.

Beth O’Brien, The Earth is a Bookcase, Black Pear Press, £6