Luke Wright heads back on the road with three different shows 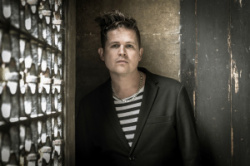 Luke Wright, this year’s Saboteur spoken word award winner and an indefatigable online performer during lockdown, is taking three different shows on tour in the coming months as lockdown eases, as well as making guest appearances with John Cooper Clarke.

Between now and the end of the year Luke will be touring The Ballad Seller based on one of his newly published books (which also features illustrations by the Guardian’s chief political cartoonist Martin Rowson); the third verse play of his trilogy, The Remains of Logan Dankworth (original dates were twice postponed in 2020); and a show of new poems Come! Come On! Meet Me!

In the first part of 2021 he has published two books. The Ballad Seller (on which the show of the same name is based) takes the style of Georgian street ballads and updates them for the modern ear, alongside the illustrations from the Guardian's Martin Rowson.

Back in Georgian times we got our news from poetry. Before newspapers, broadcasts or the internet, ballad sellers would hawk broadside ballads on street corners for a penny. Scandalous affairs, grisly crimes, and colourful characters were brought to life in rhyming verse long before the first tabloid was printed. Wright has rewritten the very best of these stories for the modern ear. Take a trip through Drury Lane gin shops with the Boxing Baroness; filch oysters by the dozen with celebrated gormandiser (glutton) Dando; and escape the Bull Ring with Jemmy the Rockman.

Luke’s other current book The Feel Good Movie of the Year is his third collection of poems, looking at the frail humanity of a battered post Brexit Britain as it emerges from the pandemic.

◄ 'You are the most beautiful dark'

50 Ways to Score a Goal and other football poems: Brian Bilston, Macmillan ► 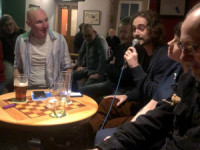