The Feel-Good Movie of the Year: Luke Wright, Penned in the Margins 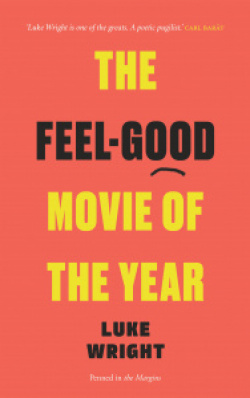 It feels authentic when Luke Wright writes about the state of England; he understands the kind of people that voted for Brexit. They are the same people who believe in Essex lions; he knows them, and mostly forgives them. There are a number of references to the state of us in his new, third collection The Feel-Good Movie of the Year, even if he tries to deny his authority on the subject:

O, I claim to know this country. But all I do

is make it in my image: squeeze it into

take potshots at its pomposity for sport.

and yes, I know it, because I know myself.

(‘The Lay-bys and Bypasses’)

He goes to ‘Lowestoft’ (“No, don’t laugh, it’s all right there”), finds a café and listens in on the chat, just like a typical poet (“I bet I don’t hear Brexit / mentioned once”). In another poem about watching the English, it’s like

watching your front lawn get trampled

trying to roll a fag with your baccy.

He keeps dropping the Rizla. Here, mate, hold my pint.

In ‘Just Look At Us Now’, he even sympathises with lemmings:

tendencies: a need to get away and hang the cost, an ache inside

that pulls them over cliffs.

He is less sympathetic towards the English during an encounter with an angry, aggressive swan while swimming in the river Waveney in Suffolk:

I saw that stately mask slip as it did

on Belfast streets and flinched

shot out at me from its serrated beak.

Back in the old normal, as a performance poet Luke Wright would have been prowling stages with a new show. Early in the pandemic he tried manfully to ensure the show went on, broadcasting nightly from his home on Twitter for 100 consecutive performances. But it seems that lockdown has affected him, just as it has affected us all in some way. In ‘Bring Me My Devil’ he tries to recall a rude, ribald self that he feels he has lost during the pandemic:

This virus saw my devil off and left me

an archbishop, a haughty health fanatic,

a McEwan-smug lecturer in rimless half-moons,

hell-bent on teaching me the names of trees,

ruddy as a camper, marching me

across the April fields: Look a tit!

In his satirical, performance poet voice, he bemoans the new collective spirt abroad:

barn owl down my back, whispering his

slanders in my ear. You wouldn’t catch him

clapping for the nurses or mucking in or queuing

The truth is, there is quite another side of Luke Wright on display in this collection. There are a number of poems about his two sons, and at least three of them made me well up while reading them. (I feel I should cry more often when reading poetry, that it doesn’t happen as often as it ought to do). At ‘A Pub Gig in the Middle of Nowhere’, he spies a boy so like his own, and later drives home with their empty car seats in the rear view mirror. In ‘The Rack’ he describes his double life following his divorce, “a single parent on the Brexit coast and / dumbstruck lover on Brighton’s shingle shore”:

mad-rambling declarations in the mandy mist

of seafront clubs with glitter on my cheeks;

then fish fingers and chips for tea

Each son has individual poems dedicated to them. Both ‘Merch Stall’ and ‘Reading for Pleasure’ saw me remove my glasses, the latter a wondrous, uplifting poem of parenthood, about seeing your offspring grow and find their own identity, which must end up in an anthology or several:

I watch you turning pages, deaf to us,

each one a cautious step away

from me, leaning less and less,

and understand how one day

you will walk away for good

and know how beautiful that is.

The first and final poems in the collection show that he has not forgotten his ex-wife, his boys’ mum. The last poem, ‘The Turning on the Halesworth Road’, refers to a place where they went for counselling, “the forecourt where we parked our separate cars …/ It didn’t / work. We only went three times.”

The first poem in the collection, ‘Ex’, is a moment of salvage from the debris of a marriage, with “not even an x at the end / of a text. I’m not saying / that I want to. I just wonder / where we went. But today / you sent a photo of our son. / It stopped me as it flashed / across my palm. We were there. / In his face. In each other’s arms.”

Luke Wright is a wide-eyed, wide-awake poet who speaks for England, and who always has something interesting to say, even in lockdown. In The Feel-Good Movie of the Year he wears his heart on his sleeve, and is willing to reveal his scars.

Luke Wright, The Feel-Good Movie of the Year, Penned in the Margins, £9.99

◄ Kwame Dawes takes over as editor of American Life in Poetry

I'm getting this one. I also made it to Lowestoft and survived.