50 Ways to Score a Goal and other football poems: Brian Bilston, Macmillan 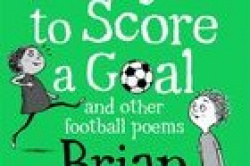 It’s all a question of timing if you want to succeed in sending the ball past the custodian – and in poetry, too. Here’s the ever-popular Brian Bilston in his football kit and with a newly-published collection - 50 Ways to Score a Goal and other football poems -  just in time for the Euros.

It’s published by Macmillan as a children’s book, and, bizarrely in my view, is said on their website to be aimed at those aged six to eight. The publishers, in their wisdom, may believe this to be the mental age of all football fans – I suppose they might well do. But believe me, all football and poetry supporters should cherish this book and want it by their side over the next few weeks, and beyond. In ‘About the Poet’ Bilston acknowledges that he “began his career with AFC Twitter”, and reveals in the final lines of his bio that his “favourite pre-match meal is beans on toast”. Me, too!

There are plenty of poems to appeal to youngsters, such as ‘Wonderkid!’, ‘The Intergalactic Super Cup Final’, ‘Pick Me!’, ‘Keepie-Uppies’, ‘A Suggestion’, ‘O.G’, and ‘Total Football’, to name but a few. ‘A Cautionary Tale’ is about a dad who is also a referee. There are others loaded with the language of football that will appeal to all ages, such as ‘Fifty Slow Motion Replays’, eleven marvellous haiku, and a poem actually called ‘The Language of Football’, which says so much about our beautiful game and brought tears to my eyes.

‘Half-Time Satsuma’ is a cunning strategy to offer a way round an age-old poetry rhyming problem. ‘On The Bench’ is a poem of Beckettian stoicism and optimism that reflects both Sam’s and Brian’s belief that he will, in the end, “go on”.

‘The Ballad of Dick, Kerr Ladies FC’ is a glorious account of the history and origins of women’s football, ‘It All Came Out in The Wash’ is a philosophical take on club rivalry, while ‘Kit’ and ‘Every Day is a Cup Final’ were two more poignant tear-jerkers for this reviewer.

As you watch – and even occasionally, nod off – during the frustrating battles of one team to overcome 11 men behind the ball, remember these wise words from ‘The Magic 18-Yard Box’:

The box is maths. It is geometry, algebra and probability.

It is shapes and lines; it is spaces and spots.

The box is a puzzle to be solved, a case to be cracked.

It is danger and opportunity.

There are no poems about taking the knee. I say this without prejudice. This feelgood poetry collection reflects two of Brian Bilston’s passions – football, and a joy in words. If you feel the same, it’s an irresistible combination. And if you think this review is on the brief side, that’s only because I don’t want to give away too many of Bilston’s secrets, his jokes and punchlines.

However, I would like to conclude by quoting ‘Season’s Greetings’ in full:

There are those who wish for Winter,

while others yearn for Spring,

some who thirst for Summer’s warmth

or for Autumn, that they sing.

But I love another, with good reason:

all those goalden days

from August to May,

To be fair, Macmillan also say on their website that this “is a must for football fans of all ages”. Here is a straight-talking publisher’s blurb that I not only understand, but wholeheartedly agree with. Enjoy this wonderful collection of football poems. Enjoy the Euros!

◄ Luke Wright heads back on the road with three different shows