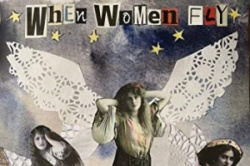 This is a brave collection that revisits the seven stages of women’s lives from the angles of displacement and personal trauma and from an LGBT perspective. The titles of the seven sections give an idea of the poet’s journey from ‘Bastard Love Child’, to ‘Barren Madonna’, ‘Grand Mother Witch’ and ‘Wise Crone’. Women are central both as ancestors and in the protagonist’s search for reciprocal renewed relationships with her psychologically and physically damaged mother and in love relationships with her own partners.

From the first poem of the collection, ‘When Women Fly…’, Pritchard addresses the hypocrisy of patriarchal society with its “sexism, homophobia, xenophobic unloves/calling me a wyrd sistah”. But the poet “is not for sale”; her opposition to these views is total and uncompromising. She refuses the role forced on her by society and breaks the rules by using language that is characterised by rupture and fragmentation, invoking freedom of expression in a world of oppression.

As Serenity Young points out in her book Women Who Fly, such women have been present in all societies since ancient times and can be found in legends, myths and popular culture. They are ‘sky-going females’ that mean to celebrate their diversity and uniqueness, shape-shifters who challenge the roles assigned to them by patriarchal society and search for an escape in ‘magical flights’. In Pritchard’s poetry this concept is developed in a heroic and metaphorical way: the aerial woman is both an angry witch and a redeeming creature who is capable of profound compassion.

Women are trapped, as is Pritchard’s mother, who marries a US military man and is abandoned when she is pregnant with another illegitimate child. She has different relationships and moves from one place to the other then back to England, where Pritchard was born. The protagonist is eventually rescued from a children’s home where her mother left her at first, but her baby brother is given up for adoption and she never sees him again. She grows up in “separate places”, following her mother around, who follows her men. She is considered “an unfit Mom” who is “BAD” and her children are seen as “mistakes”.

In a search for her identity, Pritchard clashes with stereotypes that are hostile to her preference for women. Her choices shape her self that she fights to develop and affirm:

I have challenged the bosses’ queer-bashing laughter

and had an affair with a woman

only four years younger than my mother.

On stage I have declared my tendencies

riddled out my inclinations in poems, jokes and cabaret.

In public I have worn badges, sung the songs

and kissed the forbidden.

There’s a woman with a penis

lying between her legs

Exploring the body and the effects of love become central in her adulthood; she moves in and out of relationships that can be rewarding but also challenging. Nevertheless, she is always proud of her choices, looking for a stronger self that she finds when she returns to education, attending university courses, and in her connection with her women ancestors. At this stage, Pritchard’s poetry develops in lyrical lines that express her longing for a more authentic self and for a freedom that seems impossible to attain:

I have always been good at missing

and the country calls back betrayal.

In the poem dedicated to Virginia Woolf that refers to A Room of One’s Own, Pritchard clearly speaks her mind. Five hundred guineas and a room of one’s own do not seem enough and do not solve the problem of women’s identity. What women need is ‘A Mind Of One’s Own’. On the other hand, women are like Madame Butterfly, the protagonist of Giacomo Puccini’s opera, who marries a US military man, Pinkerton, and is abandoned, forced to give away her son and consequently commits suicide. Pritchard attends the show with twenty women from a women’s centre, women “who have been/abused, raped, violated/in & out of care & prison/who’ve given up everything for love”, similarly to Madame Butterfly. They are women who are constrained to the point of metaphorically killing themselves, pushing the blade into their self-effacing bodies.

Pritchard’s verses also develop powerful repetitions that express both the vulnerability and the potential of damaged bodies in a redefinition of the Gospel’s beatitudes:

Bless the child whose mother is beaten

whose father is a time bomb of a control freak

who lives with Nan and never sees Mum

whose parents gas themselves in a car

down a lonely lane one night.

Bless the child who doesn’t remember

and never met his father

who fixes meals & washes her Gran in the morning

who she shares her bedroom with

then sorts her younger siblings.

Dispossessed lives are entrenched in the human condition where the “bravery of vulnerability” and surviving despite everything are celebrated in sharp imageries:

Come let me hold you

Come let me hold you

your scars, your bruises

your stitches, your broken bones

your insides turned out

At the end of the collection, the mother’s hand and the daughter’s hand finally meet. This seals a reconciliation of past troubles and an acceptance of one another’s flaws. The daughter helps her elderly mother to wash herself and get dressed; she buys her “the treats she will not buy herself/ … finally holding her like the child we were/waving to other mothers in the sky,/on the last great goodbye/… in unconditional blameless/everlasting acceptance and love/Our mother.” The moving conclusion embraces the link between mother and daughter in a reciprocal understanding that is also a regeneration and describes women who fly not as monsters and witches but as angels of sorts who are united in a sisterhood of compassion and love.

◄ 50 Ways to Score a Goal and other football poems: Brian Bilston, Macmillan