The best of Attila the Stockbroker, with knobs on! 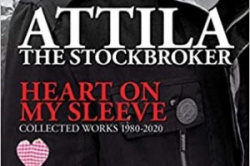 I have no truck with folk who deem poetry about terrible events ‘tragedy porn’. I’ve long held the opinion that poets are cultural historians, and that it is almost our duty to document tragic or unjust events as they happen, to write the rights and wrongs, power dynamics and hegemony, the nitty-gritty that is omitted in history books, or brushed under Murdoch’s media carpet. We provide balance in a world skewed towards capitalist and/or religious ends. You can tell how important poets are by the amount that get killed all over the world for writing poetry about injustices in their own lands, by their own governments.

Thankfully, that doesn’t happen in Britain, otherwise Attila the Stockbroker would have been offed a long time ago, and we wouldn’t have this collection, amassed over 40 years, to savour. We wouldn’t be able to flick through its pages and read about the Berlin Wall coming down, its effects on the people who live there, and those who only visit or read about it in the papers. We wouldn’t delve into the dark corners of Hillsborough, Grenfell, the 1980s terror of The Russians during the Cold War, video nasties, 9/11, the Battle of Orgreave, the Paddington train disaster, Aberfan, the election of Donald Trump, the ‘financial crash’ of 2007, or indeed, tabloid photos of a certain prince’s royal appendage. Pretty sure that last one would get you stoned, whipped or hung in some other places on this planet.

‘Heart’ kicks off with a suitably heart-warming poem for his wife Robina, written during lockdown and accompanied with a photo of the still-very-much-in-love married couple

We looked into each other’s eyes and said

‘No one I’d rather be in lockdown with’

I think there are many couples who have uttered those words, and plenty, of course, who haven’t.

There follows a section which the title of the collection infers – Attila’s heart being very much on his sleeve in poems about his late father, his stepfather, Auntie Rose, and the epic heartbreaker ‘The Long Goodbye’, written for his mum when she was suffering from Alzheimer’s disease. There’s a delicately poignant poem in this section which I just love. Anyone who’s cleared the house of a deceased parent will recognise the scenario of finding items or photos that catapult you back to childhood.  ‘It’s Made Of Wire’ is one such poem:

It’s made of wire.

No, let’s be more specific.

It’s a piece of wire.

A piece of wire twisted round itself

with a loop at the far end.

Lassoing a boiled egg with the wire noose

and burning my fingers

as I try to manoeuvre it into the egg cup

so I can experience the wild, destructive delight

of forcing it through the ridiculously inefficient egg slicer

Mum painted pastry with it.

I wish I had saved the wire lasso

and the egg slicer

and the funny brush thing

- and that is ridiculous.

It is ridiculous isn’t it?

The physical properties of those unpoetic kitchen utensils translate, via memory, to love, to safety, to a time when neither one of you considered you might not be here one day. The wish to have hung on to ‘useless’ items is imbued with a longing for the physical presence of the lost parent, and the ache left behind when we are dragged away from the age of innocence.

Attila’s usual bluff and bluster, the rough and rowdy poet, disappears behind a gentle veil of kindness, love and care that really is the root of the man, that spurs all of the other stuff. In truth, he loves humanity, hates exploitation.  His passion comes from that deep love and compassion; you don’t get one without the other. There are liberal splashes of grief for friends who departed too soon, indeed, the book is “In memory of Steven ‘Seething’ Wells, 1960 – 2009. We started together. He finished too soon”, and these nestle alongside Just Plain Revolting poems, including the infamous ‘Joseph Porter’s sleeping bag’ .

I confess, some of the earlier works surprised me, in a good way. I was expecting rhyming couplets and ABCB rhyming structures, but not streams of consciousness, and definitely not verse flavoured with more than a hint of Ivor Cutler

On the beach at Worthing

by the sewage outfall

We walk the shingle

and the crabs on the nearby groyne

remind me of more intimate times.

Your hand resembles a limp flounder.

I squeeze it dispassionately.

Refreshed, we return for dinner.

In a section entitled ‘A Load of Belloc’s’, dedicated to the humour and style of Hilaire Belloc, Attila’s earliest poetic inspiration, titles such as ‘How Are Your Bins Doing In This Hot Weather’ are just funny on their own, and some are short though still chortlesome:

The Axolotl is a beast unsung.

If Nature ran its course, the Axolotl

Would be a Salamander. But it’s notl.

I was raised on juvenile humour. At the grand old age of 53, I still think my own farts are funny, so poems like this are right up my avenue. Ahem.

As if being a poet, journalist, multi-instrumentalist musician, journalist and political activist isn’t quite enough for one man, he’s also no stranger to rap, and ‘Heart’ contains several of this ilk, one of which points out the versatility of the performance poet, who can perform at a moment’s notice

Filled in at Glasto while they hunted for a sparkie

Filled in for Donny Osmond and that’s not a myth

But I’ll never be a sub for Craig Mackail-Smith

The latter played for his beloved Brighton and Hove Albion FC, for those not in the know. Of course, no collection by Attila would omit one of his all-consuming passions, football. There are eleven pieces in the Football section – one has to wonder, was that a deliberate choice, or serendipity at work?

It took me several days to finish the book, and what struck me was how laborious the selection and ordering processes must have been. Imagine writing constantly over 40 years, and then having to choose which pieces you wanted in your collection. There are no less than 180 works of poetry and song lyrics in this opus. Having picked out which ones would make it, you’d then have to decide which order they ran in. Anyone who’s ever put together a (much shorter) collection will know what a swirling confusing ever-changing headache this can be. Still, he’s had the whole of lockdown to do it, and you can’t spend all your enforced time off the road just fishing and gardening.

I think it’s important to mention that without Attila the Stockbroker, or John Cooper Clarke, the performance poetry scene as it is today almost certainly wouldn’t exist, and definitely not for working class/radical poets. Launched into public consciousness by two John Peel sessions and a Melody Maker front cover in the early 1980s, Attila has spent 40 years touring the world performing his unique brand of spoken word, poetry and music.  Having played almost 4,000 gigs in 24 countries, releasing countless books and records along the way, he’s now viewed as the godfather of the British spoken word scene.  Heart On My Sleeve celebrates the 40th anniversary of his first appearance, and a lifetime doing what he loves.  These two working class men, one northern and one southern, opened the poetry doors for the rest of us, and I know I’m not the only one to feel deeply grateful for that.

This is a must-read compendium of social commentary, human observation and humour, a lot of humour, the daft kind, the cutting kind, the scything-down-the-power kind. There is a poem in here that will match any mood, that will stand nose to nose, boot to boot with any fascist or exploiter of humanity, or will make your granny laugh till she snorts. And underneath it all lies his message to us all: that you don’t need to be ‘a celebrity’ to lead a life earning your living doing what you love to do. You just need a way with words, the self-confidence and organisational ability of Napoleon and skin thicker than the armour of a Chieftain tank.

His knob, his knob, a picture of Prince Harry’s knob, HIS KNOB!

His knob, his knob, a picture of Prince Harry’s knob!

His knob, his knob, a picture of Prince Harry’s knob, HIS KNOB!

His knob, his knob, a picture of Prince Harry’s knob!

Yes I’ll read the Sun and I’ll believe it

With my picture of Prince Harry’s knob

Hello to a new look at our archives ►