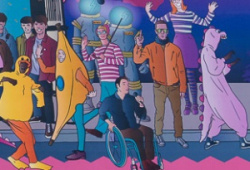 A regular poet and legend at Write Out Loud Wigan for the last 20 years – and more recently a regular contributor at Write Out Loud Woking on Zoom - has been included in a Wigan artwork celebrating the regeneration of one of the town’s streets.

Shaun Fallows, who is a wheelchair user, said: “It was a lovely surprise – it really gave me a lift. We all look a bit like the cover on Sgt Pepper.”  In the artwork Shaun is pictured in his chair with a microphone along with rugby league legends, Charlie Chaplin and The Verve’s Richard Ashcroft plus many other important local figures on an eye-catching wrap-around by artist Dom Foster outside Wigan’s Royal Court theatre in King Street.

Shaun was a regular at Write Out Loud Wigan at the Old Courts arts centre before lockdown. The arts centre is heavily involved in the Streets Apart programme to help revive King Street. He added: " I was surprised because I didn't think people had noticed, any of the years I was trying to write, and while you're writing you don't always see those signs of progress, so that recognition helps you go forward. I think the venue and the artwork is essential too because not everyone is academically strong. I was academically allergic but art is my key to be in the world, showing what we can do." 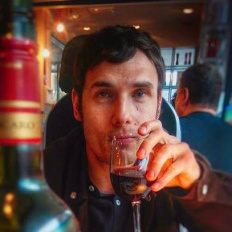 King Street is part of Wigan’s heritage zone action programme. It has many buildings that are listed as nationally significant for their architectural and historic interest. However, over recent years, daytime use of the street has reduced, vacancies have increased and the condition of many buildings has deteriorated.

Shaun Fallows was born with cerebral palsy. In recent years he has appeared on a Channel 5 programme to talk about disability, and also published his first poetry collection, Access-Ability. Last year he campaigned for more freedom to use gyms during lockdown. In an interview with Write Out Loud last year he talked about plans for his next poetry collection, and why he feels that “the chair has given far more to me than it’s taken away”.

◄ How I learned to love the kyrielle, the kimo, the ovi, and the bop

The best of Attila the Stockbroker, with knobs on! ►