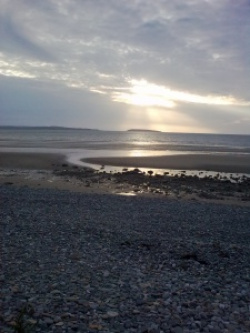 I went to north wales with my kayak at the weekend and went out in dangerous conditions.  Here's the poetic account of that:

as they battered on the wavetops

of the madly swelling waters

of the dragging ebbing tide.

They threw me in my fragile shell.

They threw me high and far,

as though a creature in its shell

thrown on their mercy.

Alternate sun and clouds bore down.

the wind and crests came faster yet

they cracked across my pitching bow

and smacked into my face.

All the time, that boiling sun,

the sun so hotly burning me

warmed the plankton on the waves

but the sea stayed icy cool.

A wave from out of nowhere turned

and into its hurling wash I was twisted

and turned the whole way under and back

saved this time around.

That day at sea, I battled on.

Frightened and alone I fought,

I battled with the fearful swell

and not another soul in sight,

only one soul on board on my craft

Waves stood taller now than I;

the waters ganged and crowded in,

I kept but half a mile from shore –

half more than I should.

White the spray blistered and froze

my cheeks were white with crystal salt

no person walked upon the front

the day too fierce for that.

To my aft an errant wave

rolled me down into the brine

upside down I bobbled around

unable to roll back up.

I pulled the tab of the spray skirt

(it didn’t budge a single inch),

the drag of the rapidly ebbing flow

was pulling me out to sea.

At last the neoprene gave way,

I swam from out my upturned boat,

but on the madly stirring swell

I couldn’t climb inside.

Six times I tried to climb inside,

dragged as if by the unseen hands,

one day in Fiddler’s Green.

I placed the paddle in the craft

weighty with water it took on board

and grasped the toggle on its bow;

one-hand, I tried to swim.

The mocking of the sea birds calls,

water smacking at my head,

the taste of saline in my mouth

and some will to live,

I fought the current for so long –

so long the day was shutting closed –

the evening was upon me now,

I was lost at sea.

Dragging me out to join with them,

were spirits of drowned seafaring men

and all the while I fought with them

and the outgoing tide

Being a soul lost, hopelessly alone

brought familiar comfort to me,

alone against the slapping waves –

all I’ve ever known.

Darkness was dropping, I was swimming,

the clouds were threatening from the hill,

the sea birds all had left for home,

Every one-armed stroke I struck

would move me several inches on

and every curling waves regress

would undo every stroke.

Each ounce of strength within me now

was tested as it fought for life,

and all the things I value most:

The only car I could see, parked

up by that empty promenade

contained my life, my phone, my keys,

One foot-! One foot was all I needed,

one toe to touch the pebbled bed,

one toe to push on solid land...

but no, it was too deep.

I started seriously to consider

that all the things I’d ever done

were all the things I ever would

and I would do no more.

Today would be the day when I

would leave this lonely world behind,

and who would miss or mourn that much

My thoughts themselves had said goodbye

and given up their endless humming;

my arm, oblivious, carried on

as though it wasn’t told.

and tested the ground beneath their toes.

The stones abraded on my feet,

then I could walk to shore.

Now I come to think of it, the "drowned seafarer" did have a beard, moustache and wild staring eyes.

Anyway, I'm about to remove that last stanza, I think you're right - it works better that way and removing it makes the poem less samey when looked at against the backdrop of the rest of my cannon.

How bizarre? I was at the sea in North Wales over the weekend, when I saw this complete 'barm-pot' thrasing the rough water to a foam. It was obvious he was in some sort distress but all I could think of was 'I wonder what's going through that stupid head of his?'

Yep - agree with Ann - last verse not needed; I would also lose one of your shells in the 2nd - or replace rather.And who would miss or mourn? ... well small deeds or actions by every single, solitary soul can have a chaotic impact on many others - I can get quite caught up in chaos theories :)
Cx

It's weird really,isn't it?What we do for the pursuit of pleasure!Liked the bit about the car containing your life,and the panicked feeling of death being almost upon you.The bit about the spirits of sea-faring men dragging you out to join them,lost at sea is another good bit of imagery.Sod's law-seems to prevail whatever we do,wherever we go!Are you sure you'll do this again?

Thanks Anne, looking at it now you're probably right and I might well do so - will sleep on it and look again tomorrow.

Wow! How exciting Dermot! I was well and truly riveted! I'd lose the last verse though. It is such an exciting poem that I think the last verse is an anti-climax. And, yes, I have just done a seafaring poem too! ;-) (As you well know!!)