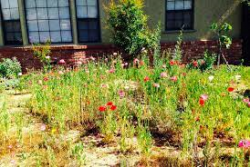 I’ve scrabbled round on hands and knees;

I’ve sprayed against a plague of bugs

But seen them eaten up by slugs;

The seeds had cost me seven quid

Which from the wife I kept well hid;

I’ve had to chuck them in the bin

In light of this my bets I’ve hedged

And gave up cultivating veg;

I sent for plug plants by mail order

To brighten up herbaceous borders;

Phlox and stocks and columbine

I fed the soil and tilled the land

Then left them to God’s gentle hands;

It made no difference what he tried

These fuckers too just upped and died.

He gave to me this gift instead-

A dandelion and nettle bed.

LEADER OF THE PACK part 3 ►

Thanks, Kevin. That car must have thought you were reading one of your poems!
And thanks for the Like, Leon.

As you may have noticed from my lack of activity on here, I haven't written owt new for a while. So I will be boring the good folks at Well spoken with more repeats of the usual stuff.
Still I can't wait. On line isn't the same.

Ps.
Did you know that someone has driven their car through the window of the Doncaster Brewery and Tap.

And rabbits, Stephen. And thanks for the Like, Kevin. Shouldn’t be too long before we’re boring them to death at WellSpoken again.

Never mind, John. Dandelions and nettles are all the rage among Green party voters

Thanks for the Likes, Greg, Aviva, Holden, Nazia, Stephanie and Julie.