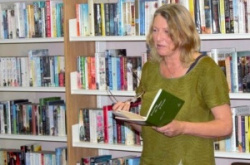 A poet’s near-fatal fall into a millpond in which she broke her back in seven places and meant a long, painful recovery has been turned into a radio programme on BBC Radio 3. Alison Lock later distilled the traumatic experience into a poetic sequence titled Lure.

The accident happened in April 2017, when Alison was out walking her dog. She had to drag herself out of the water and along a path for half a mile before finding help, and was in a body and neck brace after the accident, unable to move. She later told Write Out Loud how her road to recovery  had involved “a long six months of pain and frustration”. Miraculously, our picture shows Alison able to stand and read at Marsden library in October that same year.

The story of Lure, on Sunday 25 April at 6.45pm, featured feature music by Will Gregory (Goldfrapp, The Moog Ensemble), with violin by Alex Balanescu (Michael Nyman Band, Balanescu Quartet), and vocals by Hazel Mills (Goldfrapp, Florence and the Machine, The Paper Cinema). More details

'I keep that scrap of paper in my pocket' ►