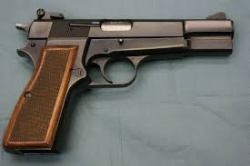 Then with fast modern transport, straight back to civility, no guns, no fear, no bombs or jets, no digging holes, hot food, three meals a day, no adjustment, no time to do so. Just thoughts and sharp memories, and a change so abnormal and rapid its incomprehensible.

I brought a Browning 9mm semi automatic back as a war trophy. It made sense there, but not here, where people were civilised, didn’t understand, couldn’t possibly comprehend.

I felt I had three choices. Get out of it and try to rejoin normality… an impossibility. Carry on and await the next go on the merry go round, or put the barrel of the 9mm in my mouth and blow my head all over the wall, I sat with that gun in my mouth, I can still fell the cold steel of the fore site against the back of my front teeth. I took up the first pressure on the trigger, maybe two or three more millimetres and it ends as it had been lived with no time to adjust.

After an indefinite period I pulled the barrel out of my mouth. Decided to carry on and took leave. Now there are more British Falkland vets have committed suicide than were lost in combat. I was lucky and re found my place, living with PTSD without knowing it. I carried on, and committed and witnessed more carnage, each time easier, justifiable. Taking risks, I had never been fitter, lost weight, I needed to put back on and keep my fitness, I went for selection for the SF, I was doing ok and got two thirds through it, the body was as battered as everyone else. But mentally I was doing it. Thats the key to the whole thing. Then I turned an ankle on a stupid Welsh mountain and couldn’t carry on. I cried with frustration. Returned To Unit!

I had one more attempt available but other “opportunities” overtook me. And I’ve had a lifetime wandering if I should have pulled that trigger.

What is in my head

Or what is in my hand.

And it was exhilarating.

I placed the hard steel

My mouth took it

aimed at my thoughts,

A squeeze of the finger away.

The steel was cold

Felt within my teeth.

But I just couldn’t

Cold in my mouth

I miss the freedom

◄ I Dance With The Ghosts. Falklands 1982 Eight

Hi Stephen it wasn't a great place, so cold and damp all the time then they sank all our choppers lol. It was what it was and is. It was hard work for sure. But I've written it now and that's it done.

Hi Julie, no I didn't know that, it makes sense though. Hope your lads enjoying soldiering. It can be great. Its taken me thirty odd years to put pen to paper and I won't be writing any more. It's too hard.

My son is currently serving with 29 and I must admit to usually avoiding anything to do with war, films, poems etc. But for some reason I read this post. Thank you for your service and for your brave write.
Not sure if you know but if you post more than one post a day, only your last post is visible without searching through your blog. Hope that makes sense.

I.N.P. I have nothing but respect. My son in law's Dad was a marine during the Falklands & no doubt saw (& had to do) terrible things, but never spoke about it, until a couple of years ago he took his 2 Sons back there & explained a bit of what happened. They couldn't believe what they heard! Sadly he passed away suddenly just a few weeks ago.

Very powerful. We owe you a debt of gratitude. Stay strong.

Thank you Stephen very much.. to be called a poet! Wonderful. I posted the full series one after another as they were a complete story, start to finish. I didn't know if people would get that and just put it down to a bombardment of poems?
Ah well it was poignant to me, the first time I've put pen to paper about it all. Interestingly you'r the only one to comment. So thank you so much for that.
But it's a long , long time ago now. Memories still fresh though always will be.

You've posted some poignant & powerful posts today I.N.P. I guess only those who have been through it can truly understand the extent war has on the mind & body. And you're definitely a poet! ?