The poetry of football (2): website has been 'swapping shirts with Shakespeare' for over 20 years 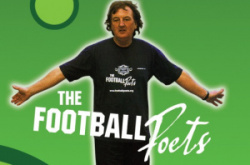 The Football Poets website was set up in 2000, is still going strong, and now has close to 17,000 poems on its site. Write Out Loud talked to Crispin Thomas, a Forest Green Rovers/Chelsea fan who is part of the only known collective of football poets in the world:

What inspired you to start up the Football Poets website all those years ago?

In the late 90s Stroud Football Poets, as we were then known, were a collective of a few local  poets including myself, Dennis Gould and Stuart Butler. We would perform our poetry and theatre in pubs and festivals, including the odd footie one thrown in. I’d been compering on the Avalon stage and gigging in the small Poetry & Words yurt at Glastonbury  and as a collective we had  also performed football-based sets at Cheltenham literature festival and then at the Royal Festival Hall for Euro 96.  With the Euro 2000 tournament approaching, we were sitting in a Stroud café talking about doing something online and our original webmaster Dave Cockcroft  offered to set up a website. And that’s how it all came about in June 2000. 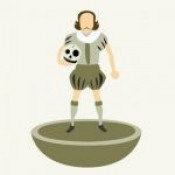 Were you surprised by the reaction to it?

As a very much a niche  market (football fans ... poets?) we were amazed how popular it became so quickly. We thought it would just be the odd poem once a month maybe. The media often referred to us and it just grew.

How has it changed over the years, if it has?

Technologically it’s moved on a lot. Poetry-wise, it goes on developing and exploring so many areas of what once was the People’s Game, which is great. People come and go.  The most challenging factor has been the way in which the internet has evolved and developed. We’d already been acknowledged as the largest football poetry site in the world but after holding the site together for over 10 years, Dave our webmaster had life commitments to deal with. Having originally been built on a now limited and antiquated platform, the site was already struggling with publishing and compiling up to 1,000 football poems a year and dealing with the unwanted trash and hackers! We binned the message board after it became constantly abused and we battled on until it became virtually impossible. Lots of our writers rallied round and contributed in bits and bobs. Luckily we came across a wonderful guy from the Spirit Of Football community interest company. Christian Wach came in and miraculously rebuilt a new system on WordPress and transferred over 16,000 football poems. We owe him big-time. We now had what we always wanted, a simple but much more interactive  site with many sections like Featured Poem and Image, Hillsborough, Munich Air Crash, Nostalgia, RIP/ Remembrance Poems, World Cup , Euros. We have lots of people who have been posting regularly on the site for over 20 years which is pretty incredible. 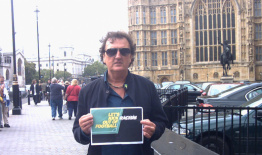 It is what it is and people love it. By day (and night) I’m a music agent, local gig promoter and performing poet with my long-time band (Out To Lunch). The site however gave me an incredible platform for over 10 years, to run workshops on tackling racism (which the sites strongly highlights) at 25 football grounds from Chelsea to Forest Green, and in countless schools, and to use football poetry to encourage struggling and often challenging students to come out of themselves and  develop a love for writing and expression.

Poems and comments have to be submitted for moderation before being posted. How strict are your rules and guidelines, and what are they?

Not any more. But you do need to register/sign up and join these days, much as you would online anywhere to post things - and it’s free of course. We’re not selling anything here, we could but we don’t. Our only rule is a poem must have something to do with football. You didn’t have to sign up or anything back then but you did have to submit poems on the old website and wait while we waded  through the entries, publishing or deleting the time-wasters. We’ve only ever had four editors in 21 years. Two have gone and now it’s just myself editing daily with help from Simon in Dublin and Christian.

Has the type of poem posted changed over the years, or are many of the themes ever-present, would you say?

A few writers only write about their own team ... still. But most have been inspired here to consider  every aspect of the obsession and addiction that is football, covering so many great areas. Nostalgia is always big as we grow older and reminisce on how the game has become the money game. (I could go on!) 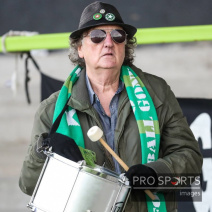 How have the Football Poets reacted to lockdown? Are as many poems being posted as before?

It definitely slowed right down last spring,  but as games began being streamed (with or without made-up sounds ... don’t get me started) they are now  flocking back again with words on Covid, missing football and nostalgia for how it was before. I was lucky enough, as a season ticket holder here at nearby League Two promotion hopefuls Forest Green Rovers, to get to two trial games last year in September and December. All in masks with 1,000 all socially distant and safely sanitised  outdoors where I stood (and drummed) at the age of 73 on the terraces, just like we did before it all took over.

Would you say the site has a particular ethos, and if so, what is it?

“Poetry is writing with passion about something you feel passionate about” - William Wordsworth. Our slogan was and still is ‘Swapping Shirts with Shakespeare’. Love it or loathe it, just like Wordsworth says, the essence of why and how those who write football poetry do is the passion and experience we share, I guess. We/they just love it, warts and all. First and foremost, though, our ethos is simply to provide a free platform and canvas that inspires and encourage young and old to express themselves, by writing and sharing ( out loud!) about something they love.

The site was selected in 2008 to be regularly archived and preserved for posterity as a site of excellence by the British Library, so the new and much of the old site is still there. Do come and join us at Football Poets!

What Survives Is the Singing: Shanta Acharya, Indigo Dreams ►