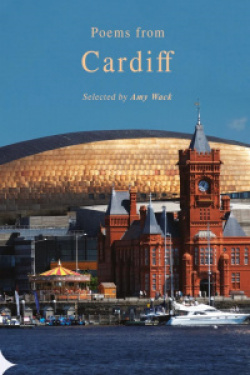 Poems from Cardiff forms a part of Seren’s attractively produced pamphlet series celebrating the spirit of places in Wales. The other pamphlets in the series are titled Poems from Pembrokeshire; Poems from Snowdonia and Poems from the Borders.  The poems in all four pamphlets are selected by Amy Wack who was born in Florida and educated at San Diego and Columbia universities and is now poetry editor at Seren.

Several poems in this volume focus on different parts of the city. In ‘Grangetown’ Hanan Issa conveys for us something of the colourful diversity of one of its largest districts. likening it to “an old blanket with mismatched squares … stitched together from faraway places”. In ‘Roather’, Abeer Ameer celebrates Roath, a district to the north-east of the city, while Ifor Thomas in his humorous poem ‘I Told Her I Loved Her A Lot in Splott’ ingeniously mentions a number of different districts, roads and locations at the end of every rhyming couplet. For readers unfamiliar with Cardiff, there really is a district called Splott. Its derivation is thought to come from an Old English word meaning ‘speck’ or ‘patch of land’ and it is frequently noted in lists of unusual place names.

Of all the poems bearing place names, ‘Spotted In The Hayes’ by Sarah Rowland Jones deserves to be quoted in full not least because of its originality and inventiveness:

on the last Wednesday in Advent

and tucked under her wing

a brand new ironing board –

to make the rough smooth

ready for the coming of the Lord.

A couple of poems focus on rivers. In ‘Taff’ Oliver Reynolds tracks the progress of two rivers that rise in the Brecon Beacons before becoming one just north of Merthyr Tydfil. His poem meanders down the page, mimicking the river’s curves. He describes it as “a thief river / stealing from little hills / and sneaking to Cardiff / to paint the town black”. The choice of colour is perhaps synonymous with its muddied waters since Reynolds goes on to say that it “has a dirty mouth / and colludes with the sea, / French-kissing the channel / all the way round to Brest.”  In ‘Afon Rhymni’ Robert Walton sings the praises of the first river he ever knew that has followed him on his life journey with the following refrain: “At the end of Ball Lane you hear its call / From the hills to the sea, it flows and falls.”

Specific buildings are mentioned. Robert Minhinnick imagines a fox paying a visit to the National Museum of Wales and Peter Finch writes about the huge variety of events and personalities, from Lloyd George to BBC journalist Wyre Davies, that St David’s Hall has hosted over the years. Grahame Davies sets his poem in the Capital Bookshop and clare e. potter writes elegiacally about the closure of Whitchurch hospital in 2016.

Sheenagh Pugh’s poem ‘Toast’ presents us with a different aspect to the commemoration of iconic buildings. This time it is the Millennium Stadium but here, the focus is more on the bodies of the builders than the building itself. Pugh unabashedly tells us that their bodies were “Sex objects, / and happily up for it”. So much so that “When women / sauntered by, whistling, they’d bask / in warm smiles, browning slowly, loving / the light.”

Tiffany Atkinson’s ‘Daleks’ reminds us that scenes from the BBC series Doctor Who were often filmed in the Hayes area of Cardiff.

Susie Wild’s ‘The Bed Testers’ made me laugh out loud. It’s not often you read about someone testing mattress springs in IKEA. Wild begins her poem by confessing “before breaking one, / we had hoped to make / this a career”.

In Peter Finch’s entertaining prose poem ‘Words Beginning with ‘A’ – From the Government’s Welsh Assembly White Paper’ the devil is in the detail and sometimes the devil is an ass. In this unpunctuated poem of words beginning with the initial ‘A’ a few words, such as ‘responsibility’, break the rules, and words ‘lifted’ from the white paper are inevitably taken out of context. As words go, I have to say that ‘arse’ is an unlikely one to find in a government white paper! Some words are deliberately misspelt which is perhaps indicative of flaws in the system.

Overall, this is an impressive collection of poems offering plenty of variety in both subject matter and mood from some of the leading poets writing in Wales today. Recommended.

The poetry of football (2): website has been 'swapping shirts with Shakespeare' for over 20 years ►