The poetry of football (1): Dave Martin, bard of Torquay United 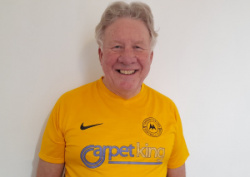 This all started with an irritable comment on Twitter from me, complaining about the bias of the home commentator during the livestream of the FA Trophy football match between Sutton United and Woking. There quickly came back a tweet from staunch Torquay United fan Dave Martin, directing me to his poem all about the subject on the Football Poets website. His lament, posted just a month ago, includes these lines:

It’s not easy being a live streamer,

not easy at all,

incapable of following the ball

or wiping rain drops from the lens

while we can see nothing at all

or zoom so far from the action

we could be up a mountain in Nepal.

You could definitely describe Dave as a committed football poet. He has been a fan of Torquay United - currently well clear at the top of the National League - for over 50 years, was the club’s official Bard for the 2018-19 season, with a poem in every matchday programme, and has a chapbook available, Come On You Yellows, of 17 football poems, some specific to Torquay, at a very reasonable price of £2.70.

Dave said of his poetic involvement with the club he loves: “It all started with Rob Casey, the Bard of Exeter City. He is one of the poets who runs Apothecary, an open mic in Bridport. I had sat in the ground at Plainmoor and then written ‘Match Night’, my first football poem combining two of my loves.  Later I wrote three more poems about some of the characters mentioned in that first poem. Then I read these at Apothecary, chatted to Rob afterwards, and he suggested I contact Torquay. I thought this was a good idea, contacted them and they were up for it.”

It should also be said that Dave is far more than just a football poet, noble though that calling is. His poetry has been published elsewhere, in Orbis, South, The New European, and online at The Poetry Village. He is also a historian, has written a number of textbooks, and has just completed Cast Bronze Reputations, a book about the cultural significance of historical statues.

But back to the Football Poets website, which has been going for, ahem, even longer than Write Out Loud. In a separate interview its founder Crispin Thomas – motto ‘Swapping Shirts with Shakespeare’ - recounts the amazement he and others felt at its immediate popularity, and how even during lockdown fans are making their feelings known in poetry. Its current featured poem is ‘Bird in Hand’ by Portsmouth fan Richard Williams, who read another of his football poems, ‘Followers’, with religious intensity and wearing his Pompey football shirt at Write Out Loud Woking last month.

Meanwhile the National Football Museum’s poet-in-residence, Paul Cookson, is just about to publish a new volume of poetry – a collection of Covid poems which inevitably includes one or two football-related ones. Here are a few lines from ‘Some People Are On the Pitch …’,  about football’s current empty stadiums, which references Kenneth Wolstenholme’s famous shout as the ref blew his whistle at the end of the 1966 World Cup final:

Just the sound of these few men

No volume, roar or row

We dreamed of stadia full of crowds

But alas, it’s not allowed

We thought it was all over

Congratulations are in order to Dave today, who has an excellent poem, 'History Wars', published in the latest issue of the New European newspaper.

Well done Dave Martin - thanks for the poem. I look forward to
seeing what results from the hoped-for promotion later on. By the way, it always seemed to me that Torquay frequently lost a game by
giving away a goal or two in the closing minutes - so often, that I
would look out for it when checking the results as a long-distance
observer from The Smoke. At least that has been less obvious lately.

Well M.C. Newberry I will certainly be moved to celebrate if Torquay are promoted back into the Football League.

After our National League South success I wrote this poem but it never made it into the programme.

Football matches come once or twice a week,
can’t be too soon during a winning streak,
but in early season’s descending gloom,
Plainmoor felt like a dentist’s waiting room.

Visiting teams parked the bus, wasted time.
We lacked invention in our forward line.
Fans were fractious for a win, a goal! So
manager Gary Owers had to go.

Even though we’d only conceded three
it’s goals people pay good money to see,
something new man Gary Johnson knew.
Once he arrived we scored more than a few.

Hooking two players before half time gave
his squad an early sign how to behave.
New loanees came in, and some moved on,
while Jamie Reid put his shooting boots on.

though in places grass cover was zero
due to our ground sharing deal with Truro.
Regardless, we played our pass and sprint game.
With goals galore, matches were no longer tame.

Nine goals shared with Oxford, our form was rich,
another seven when we played Dulwich.
In the New Year we lost to Bath, Welling
and Weston but the pressure was telling

on Woking too and when we drew 3-3
at the Kingfield we knew it was meant to be.
Then we beat Eastbourne 2-0 at Plainmoor
which meant we were Champions for sure.

We ended up top ten points clear, what a year,
fans had 108 goals to cheer.

Somewhat ironically, Torquay have been drawn away to Woking in the Trophy quarter-finals. May the best team win! We're also at home to them in the National League this Saturday as well.

If Torquay (The Gulls) maintain their present form they should gain
promotion back to the Football League proper where they belong.
My brother-in-law lives within a shout of Plainmoor, the team's home
ground, and even at his advanced age would probably jump from
his armchair and indulge in a bit of arm-waving if that happened.
I'm sure Mr Martin will be considering that promotion for a celebratory poem.