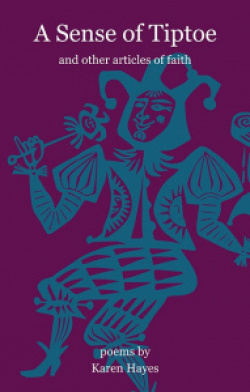 Karen Hayes spent the earlier part of her working life as an actor and musician and later artistic director of the Bristol-based theatre collective Public Parts. From theatre she moved towards lyric and libretto writing and poetry, creating texts with marginalised groups in society, in particular, people living with dementia. Her collaborations with composers have led to performances at, among others, the Three Choirs Festival and her poem The Belgians won the Foreign Voices competition. A Sense of Tiptoe is her second full-length collection with Holland Park Press.

Hayes was Charles Causley poet-in-residence at Cypress Well in Launceston in 2016 and 2017 and several of her poems, in particular the ones whose titles are followed by named churches in and around Launceston and Bodmin, were written during her three-month residency at his house. Several poems come close to Causley’s style of writing and the collection is dedicated to him.

The 27 poems that make up this collection are structured into three distinct sections of roughly equal length. The sections are headed ‘Definite,’ ‘Indefinite’ and ‘Finite’. According to Hayes, the poems in the first section relate to phenomenon experienced at first hand, the second to phenomenon mediated through a work of art or a tale told by somebody else, and the last part to “ideas that are bigger and last longer than their parts”.

The full title of this collection is ‘A Sense of Tiptoe and other articles of faith’. There is surely a play here on the grammatical term ‘article’ in terms of its division into the definite article and the indefinite article defining whether something is specific or unspecific and the grammatical term ‘finite’ in the sense of a finite verb or a finite clause. In addition to this, many world religions have articles of faith which set out general tenets of belief.

Hayes draws her inspiration from Cornish churches, religious artefacts, bells and bell-ringers, paintings, stone circles and local legends. Some poems in the collection are very much linked to place and others are parts of sequences inspired by a particular location. ‘At the Cathedral’ and ‘Worthy’ depict the architecture and monuments in Bristol Cathedral while ‘The Twelve’ was composed during a term of jury service at the city’s magistrates court.

Not all of the locations in this book are in Cornwall. For example, in ‘Oh, When The Saints’ the location is St Peter-on-the-Wall, Bradwell-on-Sea, Essex. One of the poems, ‘The Leper Squint’ is set at St. Thomas’s, Launceston where Causley is buried. The poem opens as follows:

Down where the Tamar meets the Kensey

Where a stone bridge spans the stream,

Gather a shoal of the unclean.

The Leper Squint was an iron grille at the far end of the church through which members of the local leper colony could observe the service without being part of the congregation. The mention of the two rivers is significant here. The Tamar forms most of the border between Devon and Cornwall and the Kensey, a tributary of the Tamar, divides the town of Launceston from its suburb Newport before flowing into the Tamar about a mile east of the town.  The mention of these rivers with their emphasis on division and the stone bridge which straddles the distance between one bank and another mirrors the subject matter of the poem in terms of separation and linkage. Hayes goes on to tell us:

For this is not the holy water

And all our good resolves may falter

Before the river meets the sea.

In several poems, Hayes takes a common situation and raises it into something more spiritual. The beach scene in ‘Galilee’ where “The Sunday crowd / Come swaggering down from the suburbs” and “Jet skis cut to ribbons / The slow swell of the tide,” someone steps on to the waves: “A woman near the slip way… stage whispers to her husband / Gawd almighty! and you thought that only you / Could walk on water.”

The poem ‘These Thanet Skies’ was written in response to a visit to the Turner Contemporary Gallery in Margate. In the poem, Hayes reimagines the artist walking “high up on the cliff, / Under a brush, broad brimmed top hat” where he is “compelled to lay his paint / In thin, pale liquid rills which seem / To call up the sea and its reflected sky / In spray against the sand.” Hayes uses colour to inform her description as she complements the artist’s palette writing about “viridian hills of water” and “an ochre sunset” that “explodes like the flare of a match”.

Two other poems, ‘Salome with the head of John the Baptist’ and ‘The Supper at Emmaus’ were written in response to paintings by Caravaggio that hang in Room 31 of the National Gallery in London. These are followed by a poem called ‘Room Thirty-One’ in which Hayes gives us a representation of both the visitors to the gallery and the subjects of the paintings whose gaze is “unsettlingly direct”. It is in this poem that we come across the title of the collection when she describes the effect that the gallery has on the visitors who “strike a sense of tiptoe, / Self-imposed…As if we were all born / Knowing to step more quietly in a gallery, / And reverent as if in church.”

In the third section, Hayes’ poem ‘The Hurlers’ draws upon the legend surrounding the standing circle at Minion’s Moor where the stones were said to have been villagers petrified at God’s displeasure. The opening lines show just how close Hayes can come to Causley’s writing style:

There’s a circle of stones at Minion’s Moor

That was once a circle of men,

But they played too hard in God’s back yard

And they couldn’t go home again.

Summing up her collection, Hayes comments that although the poems were written at many different junctures and for a variety of projects they seem to have a single theme: faith. “Not all of them are concerned with the kinds of faith which might be contained by religion or ideas of God and some are more preoccupied with our ideas of faith in ourselves and our own humanity or lack of it.” This is a very fine summation of the contents from the poet herself. Anyone who is an admirer of Causley’s work will also enjoy this book for Hayes comes close to his style while still retaining an individual voice. One of her strong points is her use of rhyme and her ability to relate a story in a perceptive and lyrical way that holds the reader’s attention throughout. Recommended.