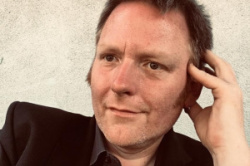 One of the poets involved in the Cerys Matthews poetry and music album project has spoken of his “joyous surprise” at being asked to contribute, and of attending a recording session at the famous Abby Road studios.

Adam Horovitz, whose memoir of growing up in 1970s and 80s Cider with Rosie country, A Thousand Laurie Lees, was published in 2014, said: “I met Cerys in 2013, when I was interviewed by her for a One Show feature on the Laurie Lee centenary. I gave her a copy of my debut book, Turning, and she’s been very supportive since. All the same, the email asking if I’d be interested in recording a poem for the project that has become We Come From the Sun was one of the most joyous surprises you can imagine. I may have been a little shrill on the phone to friends afterwards.

“All I knew was that I was to go to Abbey Road one afternoon in February and bring three poems. I didn’t know who else was going to be there, and indeed only learned the full roster of poets when I heard the album for the first time towards the end of last year. That nice little frisson of mystery certainly helped sustain my excitement throughout months of lockdown and isolation, as did the memory of recording in Abbey Road (my earliest musical memories are of the album of the same name and I was so overwhelmed by the quick tour of the Beatles studio after we finished recording that I failed miserably to get photographic evidence …).

“Recording in February, the poets missed the impact of Covid. My understanding is that the music ended up being written remotely, which is relatively easy to do given the technology at our disposal now - easier than herding 10 poets into a studio during a pandemic, anyway.

“I’m delighted beyond measure to be on the album, alongside several poets whose work I have admired for a long time and a few who I have been delighted to discover only now, and to have our words buoyed up on the meticulously exquisite shoulders of Cerys and the Hidden Orchestra’s music.”

Adam added that he has been “interested in the relationship between music and words my whole life - I was brought up from the cradle surrounded by this cross-pollination, thanks to my father’s [Michael Horovitz] long-standing jazz/poetry partnership with Stan Tracey, and his Poetry Olympics events which championed others in that field, which was in turn inspired by the Beats, Langston Hughes and Kenneth Patchen’s forays into fusing poetry and music. I have worked with musicians numerous times (I’m currently producing a poetry and music podcast, The Thunder Mutters, with fiddle player Becky Dellow, which celebrates the writing and musicology of John Clare) and plan to continue doing so.

“There’s been so much good collaborative work done connecting poetry and music in the last 60 years or so, in Britain and across the world, bubbling away at the fringes and slowly gaining ground in the mainstream. My hope is that We Come From the Sun furthers this process. Anything that brings a wider interest in, and understanding of, poetry (in all its multitudinous forms and strands) is a good thing in my book. Or, for that matter, on my stage.”

Adam’s poem on the We Come From the Sun album is ‘A House Built From Cloth’, which is about growing up in the Slad and Stroud valleys, and how the cloth industry is woven deep into the local history and landscape.

POETRY IS IMPORTANT IN THESE DIFFICULT TIMES - HELP US TO HELP OTHERS CREATIVELY, IF YOU CAN ►

Slad is a lovely place. Great pub too, with the graveyard just across the road. Laurie Lee wrote of his pleasure, as he sipped his pint in there, at watching tourists drive up, wander into the graveyard, then come into the pub to ask where Laurie Lee's grave was.