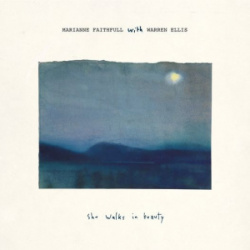 Legendary 1960s figure Marianne Faithfull has unveiled her latest album project – reading the works of the Romantic Poets, including Keats’ To Autumn, and Ode to a Nightingale, Shelley’s Ozymandias, and Wordsworth’s Prelude - to backings provided by collaborator Warren Ellis, of Nick Cave and the Bad Seeds.

Faithfull was working on the project in April 2020 when Covid struck. She was severely ill and not expected to survive. In an interview with the Guardian she said she still suffered lasting after-effects: “Three things: the memory, fatigue and my lungs are still not OK – I have to have oxygen and all that stuff.”

She said she was first drawn to the poems at school. She wanted to record them “for a long time, but I could never think of how, and what record company would ever want to put it out; who would even want to hear it. Even I thought about it commercially, and that’s never been my way. I just couldn’t imagine it. But then finally, really because of Warren and my manager François, I saw that I could do it now and – this is terrible – but it’s perfect for what we’re all going through. It’s the most perfect thing for this moment in our lives. We recorded it in lockdown, and I thought so as I was doing it. I found it very comforting and very kind of beautiful. Now when I read them, I see eternity – they’re like a river or a mountain, they’re beautiful and comforting.”

She says in the interview that she had sung around folk clubs in Reading as a teenager but had no desire to be a pop singer. “I was going to go to Cambridge or Oxford and study English literature, philosophy and comparative religion.” Her life and plans changed when she went to a party thrown by the Rolling Stones in the company of her soon-to-be first husband, John Dunbar. She was spotted by the Stones’ manager, Andrew Loog Oldham, who thought he could mould her into a star. “It was a terrible idea,” she says now.

Her singing career ended in 1967, and she spent the rest of the decade famous for being Mick Jagger’s girlfriend, before breaking up with him and sliding into drug addiction. In 1979 she made a comeback with the album Broken English, with songs about addiction, terrorism and infidelity. She says in the interview: “You know, I didn’t go to Oxford, but I went to Olympic Studios and watched the Rolling Stones record, and I watched the Beatles record as well. I watched the best people working and how they worked and, because of Mick, I guess, I watched people writing, too – a brilliant artist at the top of his game. I watched how he wrote and I learned a lot, and I will always be grateful.”

Her new album, ‘She walks in beauty’, will be released on 30 April.