Taking a walk with Simon Armitage along the North Sea coast 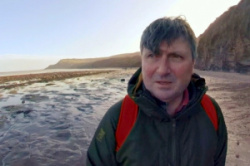 Fancy taking a walk with the poet laureate? From the comfort of your armchair or sofa, of course. Simon Armitage will be your guide on the first of a series of BBC Winter Walks, on 6 January on BBC4.

He heads along Yorkshire’s North Sea coast, from Ravenscar to Robin Hood’s Bay, in part following the scenic route of the disused Scarborough to Whitby railway line, now known locally as the Cinder Track. “It must have been exciting, if you were on the train, coming along the line … you might have been on your holiday, going to Robin Hood’s Bay,” he observes at one point.

Though Armitage does not dwell on the railway, which was closed by – who else? – Dr Beeching in 1965, it is perhaps a little homage to another poet laureate who had a deep love of trains, Sir John Betjeman. He stops at a scenic viewing point, saying that “it is a good place for a picnic, good place for a poem, too”, and recites one by Imtiaz Dharker, who apparently turned down the laureateship before Armitage accepted the post.

He encounters walkers, and farmers, and peacocks, before descending to the beach to see for himself the effects of cliff erosion, such as a crumbling world war two pillbox disappearing over the edge - no longer any use as a line of defence. He talks of the land’s “wounds, the scar tissue left behind” and likens the banks of exposed grey shale rock along this section of coast to “stretch marks going out into the sea”.

Eventually he arrives at Robin Hood’s Bay, clambering back up a long series of steps -  “think I’ve got the wrong size legs for this, the wrong gauge” -  and getting temporarily lost in the coastal town’s “rabbit warren” of passages and alleys. Robin Hood’s Bay used to have its own station on the old Scarborough-Whitby line. Now 75% of the place is made up of holiday lets, with only about four dozen full-time residents left.

Armitage arrives at a pub at the sea’s edge, and gets into conversation with a couple from Wakefield, replying: “I’m from Holmfirth.” Throughout his walk the poet laureate is observant and low-key and unassuming. It makes for a charming programme, filmed in January 2020, before Covid restrictions were introduced.

You can also watch the programme on BBC iPlayer here