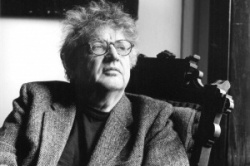 Paul Muldoon has won the £5,000 Michael Marks award for poetry for his pamphlet Binge, it was announced on Monday night. Binge is published by The Lifeboat Press. The judges’ comments after it made the shortlist spoke of their delight at “the great energy and inventiveness of these poems, their formal and linguistic brio and the emu-like way they seem to digest almost any subject matter.

“Some poems address landscape and life in Northern Ireland, others address friends and alert us to wonders and strangeness around the globe. The poetry can be very much of the moment – the title poem is a fantasia on a week’s news stories from The Times –, but it also ranges back across millennia of culture and history. Along the way, deadly serious observations rub against genuinely funny jokes. Paul Muldoon may be a long established presence, but this pamphlet is wonderfully fresh.”

The Michael Marks awards for poetry pamphlets were established in 2009 to promote the pamphlet form and to enable poets and publishers to develop.