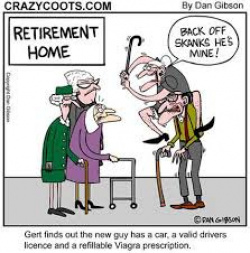 We started at seven with everything fine

The Old People’s dance would be over by nine

We were lovely and cuddly, wise and benign

It was Christmas and things were so festive

No reason for it to get restive.

(You all get your cuppa and biscuit for free)

But the shit hit the fan when old Mrs McGee

Who is a chocolate obsessive

The baking was done by two local nuns

When he said that he’d like to nibble their buns

We thought he was being suggestive

The atmosphere turned to oppressive.

And then when the Barn Dance became a Paul Jones

Refusing to pass on that fastcat Ramone

But danced with her twice successive

Which everyone thought was excessive.

Then young Mrs Tomlinson she waded in

(Who never left home without a large gin)

And caught her a pearler square on the chin

They said that the dance was progressive

And all of us thought that it was a bit much

We certainly thought it a feel not a touch

His smile was very expressive

It seemed her grip was compressive.

Then Mrs Green sprang from her cart by the wall

And keening a war cry entered the brawl

The Barn Dance resembled a scrum or a maul

Her rucking was very impressive

But scarcely Christian or festive.

So round about eight the police would appear

And so that will be that until the next year

For a bunch of Old Gits and senile Old Dears

◄ I MISS THE MAN THAT I USED TO BE

I am 100% certain now that my Norfolk twang lends itself to doing some right broad Norfolk poems and maybe some singing postman kind of stuff.

That is gonna be wot I do.

All John, thanks to you!

Thanks for the comments, Stephen, MC and Ray. I have googled “Paul Jones” and I may have been mislead all these years. According to Wiki (which is always right) a progressive dance of the type I described is a mixer. A Paul Jones is a particular sort of mixer.
No matter. I’d have been buggered trying to rhyme “mixer” rather than “Jones”.
And thanks for the Like, Stephen Atkinson.

I remember the Paul Jones having played it a few times John. It was different dances one after another linked by Here we go round the mulberry bush; I think your version if more behind the bush, but infinitely preferable to the original dull affair from a musical perspective. Roll on the drums and i'm away!!
I love the blend of age and sex, it's the only way nowadays.

I like being led this merry dance! But couldn't the Reverend's grip have been "a shade too possessive" instead ? 😍 Just carping like we old folk do!

Enjoyable and educational (I didn't know what a Paul Jones was!).
Good stuff.