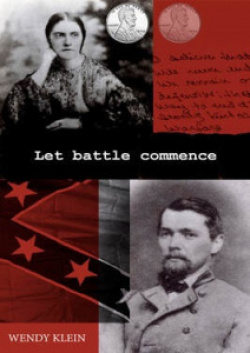 Wendy Klein was born in the United States but has lived in England for many years. Her great-grandfather fought in the American Civil War, and was a slave-owner “whose beliefs could not have been more different from my own”, she says at the outset, in her introduction to her short collection of poems based on his wartime letters home.

I would say at a guess – or at least, speaking personally - that there is still a lack of detailed knowledge in this country about the American Civil War. The first poem in the collection, ‘Introducing Your Very Own Great War’, in the voice of a street-corner news vendor – and with a flavour of Oh! What a Lovely War -  helps to put it in historical context, asserting that it pioneered ironclad ships, trench warfare, the Gatling gun (precursor of the machine gun), and the first landmines: “How clever you’ve become at maiming / one another, at killing / what giant steps forward, your greatest war.”

In ‘I Meet Him’, Klein introduces her great-grandfather, Robert Melvin Tarleton Jr, via a photograph, and with a line so evocative of the beginning of all wars:

a pert bowtie under his stiff collar.

on his first day back from med school,

proud to serve, certain he will be home

In another poem, ‘My great-grandfather imprisoned in my roll-top desk’, she reveals her reluctance to write about him “until I am ready not to misrepresent him”. Inside her desk are

while serving as a lieutenant in Smiths Battery, Kentucky.

This imprisonment is cosy, a holiday camp compared

to the Yankee gaol he will escape from to marry

‘The Real Rebel Yell’ refers to the battle cry used by Confederate soldiers. Klein tries both to ascertain and to imagine what it sounded like:

… that strange warbling that rose

from the throats of thousands of boys and men

when they charged through the smoke and dust

at the Union line …

She wonders how they did it: “Wouldn’t your voice fail? Imagine advancing / with an empty musket through geysers of dirt, / trying to control your voice and your fear.”

This is not the romance of war, however much the tattered and tarnished old Confederate flag is still brandished today by far-right white supremacists and self-appointed militias, but the pity of it.

Klien’s great-grandfather is taken prisoner, but escapes and trudges 360 miles home: she imagines him “running into bayou to be raked by low branches of cypress, swamped / by dank curtains of Spanish moss, accosted by alligators.”  The war ends, the South vanquished, and thousands of slaves are freed each day. He hints in a letter of “dangerous consequences”. But

would not live to witness what happened

when the Union Army withdrew after

the order of the noose.

In ‘The Second Time my Great-grandfather Mentions Black People’, Klein says “what follows is hard for me to read” – and the words he uses are impossible for me to quote. Nor do I want to. She says:

I am trying to forgive him

words in everyday use in the post-war misery of 1867,

and to see him as a loving father, a decent gentleman

He left three children, but died aged only 30, on the very day that his wife was giving birth to a daughter. Did war hasten his death? His young widow never married again. Klein imagines her as Vivien Leigh at Tara, retaining enough of her Southern allegiance in old age to rail at a nurse who brought in a small American flag:  “your voice strong as ever: / Take that flag out of this room.” (‘My Great-grandmother as Scarlett O’Hara’).

Some of the poems in this collection feel fragmentary, gleaned and constructed as they are from letters home, and sometimes the subject matter and language leave the reader with an initially uneasy feeling. For her part, while clearly disowning his cause, Klein is determined not to indict her great-grandfather:  “And who, now or then, will have / the audacity to judge him? Not I.” (‘R.I.P’). One thing is certain. These poems have an undeniable historical interest, in the light of America’s apparently intractable divisions, still lethal and unresolved today.

'Never resting, working from sheer will and memory, working with quill and ink if need be' ►

Review » 50 Ways to Score a Goal and other football poems: Brian Bilston, Macmillan

GF - I've ordered a copy online and now look forward to receiving it.
Thanks for bringing it to the attention of WOL participants..

Thanks for your detailed and very knowledgeable response to this review, MC. Glad that it attracted your interest. Wendy Klein does include a poem, 'Honest Abe and the Myth Kitty', that refers to the point you make about the Lincoln administration. I probably should have mentioned that as well - well, at least I have now.

During past years i had a huge interest in this momentous bloody
conflict and the considerable range of books and photographs
available to study. This publication seems a very worthwhile
addition. Freeing slaves seems not have been the primary aim
of the Lincoln administration according to some sources but a
moral imperative that was politically desirable if a "United"
States was to be achieved. It seems likely that the average southerner, scratching a living across that vast swathe of country.
-people like the Cajuns and others, for example, had little to gain
over the slavery issue, comparable perhaps to the the average
Brit of other days - unable to access the luxuries of sugar and
coffee that only the aristocracy and well-to-do could afford.
One notable South Carolina slave-owner was black...an interesting
aspect of who fought and why the conflict was fought. The South
has always maintained that it resisted the North's "imposition" of
its demands because it removed the right to self-determination..
Even now in a Federal administration system, the "state" has
autonomy.in governance on a local level. General Robert E. Lee
was a Virginian who could have served on either side but chose to
serve the South. It's never been claimed his intent was to retain
slavery so it seems other forces and allegiances were powerful
at that time. And it has to be remembered that those involved had
grown up with - and never known anything different from - the way
of life that existed. I will be placing my order when I locate this volume online. To anyone with an interest in that conflict I can
recommend the trilogy of books by US author Shelby Foote and
the superb DVD set by Ken Burns (in which Foote appears)..