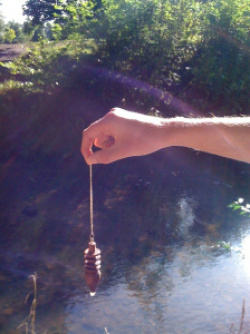 Treading the fields with his hazel twig

Showing farmers exactly where to dig

Parched crops wilting as far as eyes can see

Water hidden, over there, by the old yew tree

A well sunk, the crops lifeblood soon to regain

Brian the village legend always did his stuff

Is water divining passed on through generations?

There is one other, dowsing myriads of applications

Brian is his Uncle and yet his own path taken

Dowsing energy within the earth to awaken

Another time, another place, he explored his capability

His best-selling book on dowsing enhanced his credibility

This wise man’s approval mattered to him greatly

Two men, both of the Earth, doing their divining thing

Hazel twig, rods or pendulum in their hands swing

Two generations united in a common purpose, a goal

Jacques Brel Would Be Shocked (Amsterdam) ►

I have two pendulums. A small crystal on a silver chain which has been with me since around 1990. Then a larger reclaimed wood pendulum; this is the one I use when teaching, as you can't really miss it! lol
I ran a crystal and dowsing pendulum wholesale business for about fifteen years, until others interests distracted me away to new horizons. Have you read Alfred Watkins books?

I have been teaching dowsing on and off for the last three decades. I will admit I am better known for my dowsing work than poetry 😀