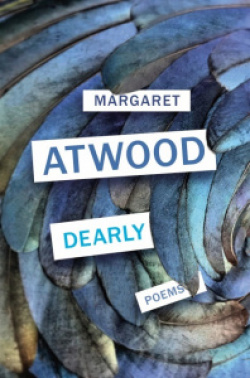 The bestselling and award-winning Canadian novelist Margaret Atwood – author of The Handmaid’s Tale, Cat’s Eye, and Alias Grace among many others - publishes her first book of poetry for over a decade next month.

Dearly is said to bring together many of Atwood’s themes, from minute descriptions of the natural world to encounters with aliens, from pressing political issues to myth and legend. The poems are about absences and endings, ageing and retrospection, but also about gifts and renewals.

Atwood, who is 80, published her first collection, Double Persephone, in 1961, and was a poet before she became a novelist. She told the Guardian in 2003 that she realised at high school, while walking home across a football field, that she would be a writer: “I wrote a poem in my head and then I wrote it down, and after that writing was the only thing I wanted to do.”

According to the Poetry Foundation, she first came to public attention as a poet in the 1960s with  Double Persephone, winner of the EJ Pratt Medal, and The Circle Game (1964), winner of a Governor General’s award. “In her early poetry,” Gloria Onley wrote in the West Coast Review, Atwood “is acutely aware of the problem of alienation, the need for real human communication and the establishment of genuine human community”. Atwood’s poems, Onley maintained, concern “modern woman’s anguish at finding herself isolated and exploited (although also exploiting) by the imposition of a sex role power structure”.

Atwood’s 1995 book of poetry, Morning in the Burned House, “reflects a period in Atwood’s life when time seems to be running out”, observed John Bemrose. A selection of Atwood’s poems was released as Eating Fire: Selected Poems 1965-1995 in 1998. Her 2007 collection, The Door, was her first new volume of poems in a decade. Reviewing it for the Guardian, Jay Parini maintained that Atwood’s “northern” poetic climate is fully on view, “full of wintry scenes, harsh autumnal rain, splintered lives, and awkward relationships. Against this landscape, she draws figures of herself.”

Read ‘The animals in that country’, one of Margaret Atwood’s poems on the Poetry Foundation site

'I will be happy if the whole world knows': Nigerian poet protests at Lagos killings in poem on Write Out Loud ►