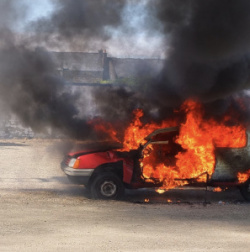 in Toxteth when someone

was stabbed and four men’s freedom hung in peril.

I didn’t know that then, although I was

stranded in the middle

thinking “What the fuckin’ fuck?!!”

of means to know the cause.

We had no internet to solve such riddles:

at ours we didn’t even have TV…

I jump ahead too far!

My own concern in this began

that September when I’d gone

off roaming, bringing me

one evening to a Neapolitan bar.

It was the break before my final year

My friends and I were only young

and deemed the strife in ‘81

no valid cause for fear:

to us that riot was distant history

so seeing a house on Princes Avenue -

that midribs Toxteth - up for rent,

and then a brief ado

at which we went our individual ways.

My own way was a bargain

but most delightful trip I made

by Interrail along the Med

in Naples, in a cafe sipping lager,

scenes, I thought, in Rome

with petrol bombs. I vaguely wondered

what this was all about, and when did

...when Margaret Thatcher loomed up on the screen.

A surge of consternation

thrust my thoughts back to my nest

in Liverpool, although I must

confess to having been

more anxious for my LPs than my nation.

But next day, scouring papers on the news-stands

I learnt the riot was not

in Liverpool but Birmingham,

so mosied home via Amsterdam

contented that this nuisance

With duty-free allowance in my backpack

I disembarked the ferry

at Harwich, called on Mum and Dad

then on to Toxteth with no dread

that last September day, along our street.

peered down on the laid-back pace

of urban life. I felt at peace

amid the steady sweep

Only one of my mates had yet arrived:

and I picked one in the flat upstairs,

accessed from the side.

I’d a fine view of the avenue from my pad.

New term some days away, we hit the pub

and rolled home quite replete,

and would’ve crashed except I found

my duty-free, and my good friend

was too polite to snub

a little nip to make the night complete.

As so often happens when you’re young

one nip became a brace,

and two progressed to three or four.

At length the drift on Alan’s floor

of all the spirit it had once encased.

although we students were

in Liverpool, we were not of it.

We studied there for our own profit,

and left with Honours grudging to confer

much honour on the city that conferred them.

We spent our most time shut

away from inner city Hell.

It’s no surprise that on the whole

and sheds some light on why I’d missed the tension

to the streets and now exploding;

and goes some way towards explaining

on that fateful first day of October

when the light of afternoon found me

squirming from my sheets,

my temples clamped in red-hot tongs,

a taste of diesel on my tongue

and looking out to see

a line of cars reversing down the street.

I’d shuffled to the bathroom, had a pee,

rinsed a mug, put kettle on

a line of cars reversing down our street?

I went to check the scene outside again

and spotted something new:

armed with sticks and stones, a gang

was bearing down, a hundred strong,

Bewildered, I beheld this wayward troop

below me. Mere autumnal fire

had toned the trees the day before

but now the hell-bent group

had organised to make a car explode.

Whose car it was and what offence they’d caused

the mob had any notion neither,

but bare hands hoicked and heaved it over.

on a wounded raven, writhed about

when someone prised away the petrol cap

and a live match was pitched

into the broadening pool of fuel.

The bird of fire, on wings of foul

in vain up at the trees but grasped no perch.

My health-kick hope that it was not

was sanctioned when I came to note

away to my right, bloom into bloody fracas.

I couldn’t see the centre of the brawl

from my lonely lookout;

just a milling scrum of thugs

up towards the synagogue

who now and then would roar

ripping off the wrappers

while coldly I surmised that

“What the fuckin’ fuck?” I kept on thinking.

In Birmingham, I knew

two men had died when arsonists

and this had delivered an inkling

that such an act could polish me off too.

And then I thought of Alan: the ground-floor flat

was easier to invade

should someone turn their mind to looting

or fancied duffing up a student.

It seemed quite likely that

he was still down there, equally afraid,

but neither of us had a telephone

and though I could have dashed

from my side door around to the front,

prudence decreed that such a stunt

could make our presence known.

I chose to stay put until the worst had passed.

All afternoon no rozzers could be seen

until a siren warned

of a blue light meteoring down the road:

a transit van with a metal pole

skewered through its screen

Later, in a lull in the affair,

looking down I saw

the sanctuary of my side entrance.

I hurried down the stairs,

let him in and double locked the door.

We waited in the haven of my flat

for respite from the white heat.

At six o’clock as night came down

A TV camera crew came up

to film some action that

we couldn’t see, further down the side-street.

I watched it on the News once we’d attained

safe refuge with some mates

who rented in a part of town

more central and not so well known

for gangs and drugs and strained

relations with the forces of the state.

On ITN we were the leading story:

beyond our house, another

car was going up in flame

and knowing how this piece of film

would lead them all to worry

we went down to a pub to phone our mothers

since every call-box in that sorry place

of vandalism, and it was only

pubs that held the means of phoning

(provided you could face

the prospect of a twenty minute wait.)

How long ago that was.  A different time

before the mobile phone

It was a long decade of conflict,

a golden age for crime

a man was hacked to death by rioters

in Tottenham. If you Google

But I remember every detail still,

and that short, violent storm

must also always haunt the driver

because he was a man in uniform.

I later heard a woman had been blinded

in the transit van

I witnessed speared with an iron lance.

Does this thought not make you wince:

you’re sent out on assignment

to do your job, and never see again?

I write this poem because I find disquieting

some calls I hear for stiffer

action from the Left to halt

greed, or climate change, or hate,

from friends who think that rioting

might help to mend the world. I beg to differ.

◄ Land of Hope and Mercy

My name is Silence ►

Thanks Greg. Yes, it took several weeks to write, and it’s taken me 35 years to get my eyewitness account down in writing, but I’ve included everything I remember about that day and tried not to embellish the story like I usually do!

Blimey, Tim, what a poem. What a story. I'll leave it to others to draw conclusions. But a cautionary tale, to say the least.