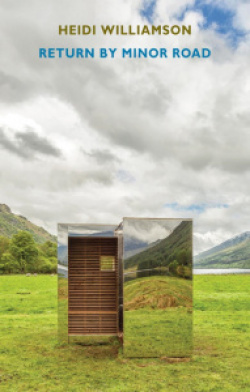 In her mid-20s, Heidi Williamson was part of a Scottish community that suffered an inconceivable tragedy, the Dunblane primary school shooting. On 13 March 1996 a gunman entered the school and killed teacher Gwen Mayor and 16 members of her class and inflicted gunshot wounds on 10 other pupils and three other members of the teaching staff. This tragic incident – the deadliest mass shooting in British history - is the focus of Williamson’s third poetry collection.

Anyone who is familiar with Dunblane, as I am, will know the place is closely associated with the river that flows alongside it below the High Street. Its measured flow “over light-grey-brown / oblong stones” is intricately linked to the roads and wooded valleys that surround it. In the first section of this book, the river is “forceful as a key” as it unlocks all the doors into the past. Through this landscape, Williamson revisits the scene of the tragedy and reflects upon it in a series of powerful and moving poems.

Careful attention has been paid to style and presentation in an attempt to express the different stages experienced through grief and loss. In four lines, ‘From’ shows how a single incident can change one’s perspective for ever:

From the hallway you can see into every corner of our small flat.

From the kitchen window: the rose garden, golf course, the Trossachs.

From the bath you can see Glen Road’s sky and sky framed.

From tomorrow all this will be different.

In ‘Scottish Spring,’ a time of year that heralds new life and a new beginning, Williamson focuses on snowdrops. The last line is a chilling echo of the sound of gunfire. It is made all the more powerful by the close association with something so small and pure as a snowdrop:

have not yet ceded to daffodils.

already the snowdrops are drooping.

Now is the time when the world

The snowdrop reappears later on in a three-line poem that references the Snowdrop Campaign, which led to the UK introducing some of the world’s strictest gun ownership laws after Dunblane.‘Cold Spring’ – which comes in two parts – unleashes a string of staccato phrases: a stricken poem that registers its shock on the page through its inability to form complete, coherent sentences. They are “small hard coughs” that come from the heart.

By contrast, the garrulous poem titled ‘And’ is a presentiment of another manifestation of shock. The repetitive use of the conjunction suggests that there is always more to be said and that what has been said already is somehow inadequate and seeks further explanation.

‘Describe’ – an erasure, created by erasing words from Gertrude Stein’s poem ‘Let us Describe’ and framing the result on the page – is a fine example of how certain words, redolent with meaning, leap out at us from a given text and register themselves in isolation in the brain.

A sense of numbness is skilfully portrayed in ‘Dumyat’ and ‘Balquhidder’. In ‘Elegy’ the teacher and the names of the 16 youg pupils in her class who died are given space as a mark of respect and read like a roll call in honour of the dead.

Towards the end of the book, the river makes its presence known again: “whatever it takes, the river keeps going.” Its constant presence is a reminder of the healing powers that can be found in nature. Even the rain brings its own refreshment. In ‘The Wild Rain,’ Williamson writes:

In here, the night is quiet and cool. Outside,

the wild rain courts the grass: even in the dark

I feel its greening – the glossed grass smooth as keratin

anchoring, protecting the dust of us.

The final poem, ‘The Place,’ poses the question: how much of a place do you ever really leave, and how much do you end up taking with you? Many of us, myself included, will never forget Dunblane. This is a fitting tribute to those whose lives were tragically cut short at such a tender age.