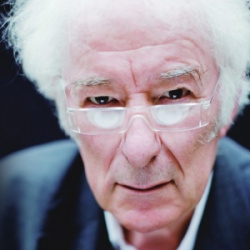 The world of poetry paid tribute in words and music to Seamus Heaney on Wednesday night at Southbank Centre’s Royal Festival Hall, in a moving celebration of his work and life, with leading poets delivering a number of spell-binding readings. The evening’s narrator, Andrew O’Hagan, said the way his friend’s work had developed over the years represented poets’ “power to replenish the imagination”.

The evening opened with the voice of Heaney himself reading his poem ‘Digging,’  the first poem in his first collection, Death of a Naturalist, from the mid-1960s, and despite his remarkable output, still his best known.

Next came a triumvirate of powerful Irish poets - Paul Muldoon, Michael Longley, and Bernard O’Donoghue - who read poems about Heaney’s feelings for the natural world, and about the death of his young brother, and mother, the poet’s words through their lips suffused with empathy and understanding.

O’Hagan said Heaney had attempted to write “the kind of poetry to help people live their lives”, even though he had once said the Troubles in Northern Ireland “had muddied the waters for him”. Heaney had “showed us the dark pit of history, the place of blood sacrifice and violence”, but also displayed “tolerance in desperate times”. His poetry at times showed “resentment of the idea of British soldiers patrolling the home ground”, O’Hagan said, but it also later, in his translations of Greek drama, “gave us the kind of humane illumination that you tended not to hear on the six o’clock news”.

Simon Armitage read an extract about the rampages of Grendel from Heaney’s translation of Beowulf, which, O’Hagan said, had “made a new classic” of the work. The celebrated Irish novelist Edna O’Brien read three poems, including ‘Punishment’, linking ancient and modern tribal brutality  - “I can see her drowned body in the bog … my poor scapegoat”, and the at-peace ‘Postscript’, with the lines: “When the wind / And the light are working off each other / So that the ocean on one side is wild / With foam and glitter”.

Paul Muldoon also read Heaney’s compassionate, observant  ‘Keeping Going’, about life going on in the aftermath of a Northern Ireland killing: “But you cannot make the dead walk or right wrong. / I see you at the end of your tether sometimes.”

O’Hagan paid tribute to the way Heaney had delighted in discovering and encouraging younger poets such as Muldoon, now a heavyweight in his own right. One young poet, Charlotte Higgins, who Heaney had partnered in the recent Poetry Parnassus project, read another famous early poem, ‘Blackberry-Picking’.

Other poets who read were Carol Ann Duffy, accompanied by John Sampson, Christopher Reid, Tom Paulin, Paula Meehan, and the actor Ruth Negga. Michael Longley returned to the stage to read the final poem, ‘A Kite for Aibhin’.

Music was provide by Liam O’Flynn and Neil Martin, on the uilleann pipes and the cello, by tenor Ian Bostridge and pianist Julius Drake, and by the Chieftains, still led by the effervescent Paddy Moloney, switching from a jig to a lament and back again in the wink of an eye, with the audience, packed with numerous poets and other celebrities, clapping in time and roaring their approval. The joy and spirit of their rippling, tumbling music: you could sense the poet smiling.

Months after his death, the aftershock is still felt; he remains deeply missed. O’Hagan summed up the evening, witnessed by the poet’s beloved wife Marie and their children, as “epic”, revealing “drama, music … the hope and the history”. He added that Heaney “would have been embarrassed by it, of course, but secretly pleased”. The fellowship on show “was in the spirit of both the style, and the man”. And so it was.