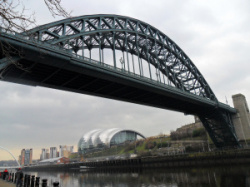 An award-winning poet from the north-east featured on the BBC Radio 4’s World at One lunchtime news programme this week, reading her poem about the river Tyne.

Catherine Graham read ‘Hyem (Home)’, as part of the programme’s Rivers series, where listeners have been invited to contribute pieces about their favourite river. The recording included Catherine singing. She said: “I'd stood at different points in the Tyne's journey and recorded the sounds. I also recorded the sounds of the bustling streets above the 'hidden rivers' that flow beneath Newcastle.”

‘Hyem’ was published in Catherine’s collection Things I Will Put in my Mother’s Pocket. Her poetry prizes have included the Jo Cox prize awarded by Carers UK. She added: “The BBC did a lovely job of putting the sounds I recorded together for the piece. The singing was just as I stood there by the river, completely unrehearsed and unplanned. My son just moved aside, like, she’s not with me, kind of thing. And I can’t say I blame him really!”

You can hear Catherine’s poem on the Monday 10 August edition of The World at One 43 minutes into the programme. Previously the poet Alice Oswald has spoken on The World at One about her association with the river Dart in Devon.

She welcomes with a smile as wide as the Tyne:

as the boats sailed like long-lost lovers into Dean Street,

silencing the battalion of buses

that bully past the building societies,

while the lads that once danced for their daddies

push bairns in buggies, with one hand.

by the play of her spirited, underground rivers

that flow, like lifeblood right up to Spital Tongues.

She is a carnival of bridges skinning a heron-coloured sky.

Flooded with pride, she lands her logo