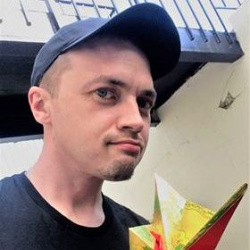 The vagaries of the literary awards process during lockdown have been illustrated after poet John McCullough revealed on Friday that he had won the 2020 £15,000 Hawthornden prize for literature.

The award, for his collection Reckless Paper Birds, which was also shortlisted for the Costa poetry award earlier this year, came as something of a surprise to McCullough. He said on Twitter: “I didn't know I'd been shortlisted for the Hawthornden. Literally the first I heard of it was when a lord phoned me while I was washing up and said here have some dosh and by the way I like the one about the musical penis. But the money's in my account! Time to buy a new tracksuit.”

He added: “In true John fashion, I managed not to look at my messages and so missed entirely the Zoom chat a while back where the five Hawthornden judges were waiting to speak to me. (In fairness, Lady Gaga had just released a new album at the time so I was very busy.)

“It was against stiff competition from many excellent novels, biographies and other poetry books. Honoured to join the list of previous winners that includes Evelyn Waugh, Graham Greene, Geoffrey Hill, Ali Smith and Alice Oswald. Not bad for a working-class boy from Watford, eh?”

John McCullough, who lives in Hove, teaches creative writing courses at the University of Brighton, the Arvon Foundation and New Writing South. Reckless Paper Birds, published by Penned in the Margins, has been described as “surreal, joyful, political and queer … a psychedelic, parallel world of ‘vomit and blossom’ where Kate Bush mingles with a weeping Lady Gaga … with a magpie’s eye for hidden charms, McCullough ranges across birdlife, Grindr and My Little Pony while also addressing social issues from homelessness to homophobia.”

The Hawthornden prize for literature was established in 1919 by Alice Warrender, and funded by a trust established by her. Authors under the age of 41 are awarded on the quality of their "imaginative literature" which can be written in either poetry or prose. The Hawthornden committee awards the prize annually for a work published in the previous 12 months.

'An older man whose gears, stiff with disuse, are leveraging his body' ►