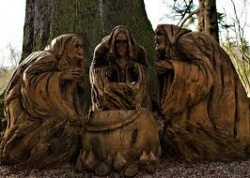 Readers should be aware that the play may contain outdated attitudes, language and cultural depictions which may cause offence today.  And nuts. And in no way does its publication, replication or production intend to justify, endorse or celebrate the morality contained therein.

In particular, we do not condone the stereotyping of the three witches as women with their associated body shaming which would have been a commonly held misconception in the early seventeenth century.

Likewise, violence upon the person in the form killing people is no longer acceptable.  Macbeth’s sticking it to Banquo and Duncan therefore is certainly not.  Especially regicide.  In future, so that it may be seen that violence will not go unpunished, Macbeth will be tagged and issued with an ASBO.

The portrayal of Lady Macbeth as scheming and ambitious is particularly damaging to women and their advancement in today’s society.  Future productions of the play will focus on her more laudable qualities – her work with disabled children and voluntary service at the cats’ home.

Indeed, we need to overlook Shakespeare’s erroneous assumption that Lady M was a woman, but open our minds to the possibility that she was a gay man or, in fact, androgynous.

The maltreatment of animals as sentient beings, for example, where the pet dog is kicked out at night to its kennel (“Out, damn Spot!”) will be deleted in future productions.  Particularly distressing to today’s reader is the reference to animal vivisection for the purpose of preparing non-vegan recipes (“Eye of newt and toe of frog…”)

The cutting down of Birnam Wood is clearly an act of ecological vandalism and should be supplemented with a scene depicting the sustainable planting of indigenous species at Dunsinane.

The Committee for the Literary Improvement of Theatre (CLIT) hope you enjoy our future culturally acceptable productions.

◄ THE CONTINUING STORY OF THE WALRUS AND THE CARPENTER

THE VERGER AND THE MAGISTRATE ►

MC - I think the main basis for the unpopularity of the Jews was usury. When they were burnt to death in Clifford’s Tower, York, in 1190, it was a wonderful excuse to wipe off outstanding debts.

JC - WS was on the money in his generational understanding of racism, depicted in his character of the Jew, Shylock, in "The Merchant of Venice" at a time when that race was not popular in
Europe for various reasons.
As for his jokes, he wouldn't have to stretch himself very far to be funnier than much of what passes for comedy these days. Bur
his plays would probably need one of those preambles we see these
days e.g. "Viewers might find the content distressing, disturbing and liable to cause offence" etc. etc.

Thanks, Stephen. Quite.
I think if Shakespeare was writing today
(a) the numpties would be sanitising his work
(b) his jokes would be a lot funnier.
And thanks for the Like, Shifa.

Thanks, John. This is truly hilarious. Perhaps there should be a warning about Peter O'Toole's very bloody version from the 80s, just in case it turns up on video. Not for the squeamish, or the schemish.

Thanks, Brian and Po. In truth, Macbeth is my favourite of all Bill’s Greatest Hits.

Did you know: Shakespeare never intended for there to be intermissions in his plays.

These were added by modern directors.

Now where is that popcorn

Careful John, you'll have the PC Brigade, BLM, and other various leftie extremist groups attempt to erase every trace of our Will for ruining their lives 500 years after he wrote his stuff.

You have a realistic understanding of my capacity to get into trouble, MC.

And now for Othello. Or maybe not...😉