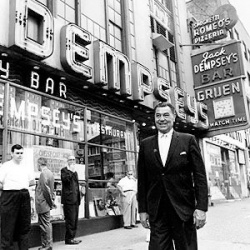 In Nineteen eighty I was again in New York. On this occasion I wanted to visit the world champion boxer Jack Dempsey's bar/restaurant. A homage to his place on Broadway, I attired myself appropriately in black suit, white shirt and black tie, I looked like a reservoir dog.

Whilst sat in the bar area I was engaged by two US marines who challenged me to a drinking competition... they're so full of macho rubbish! The drink was chosen by them and was to be a bourbon called Wild Turkey, after a short while one of the marines vomited... epic fail as our young now say.

But it was a wonderful experience to visit the great mans place.

for coffee and cigarette.

In a dark wood cased cabin

A million other people

who jerked through the same dance.

Night before around the world.

I stepped in time with you.

On subways that fled past

filled with germs and smoke,

And the lost waiting mindlessly

For a gap to mind.

seen in a thousand unseen glimpses.

Speeding past every mugger

and murderer in New York.

On the way to towers of shit

and drugs and petty insanity.

I’d smartened up for the task

My goal that night.

“Get the Limey a drink”.

to fight again in Jacks bar.

Two US marines vomited their youth away.

They underestimated their challenge.

“You’d better clean that up motherfucker”.

And a way with words.

As I had, from sixteen.

trying to be both.

We had hard drinking trainers.

On Hessel Rd in “Raynors”.

How can I have missed this kind of lifelike portrait of life scribbled with you pen Phil.

I have lots of fun to catch up on.... It's almost like being a fly on the wall.

What a great observational poet you are.