You Could Own An Upright Piano 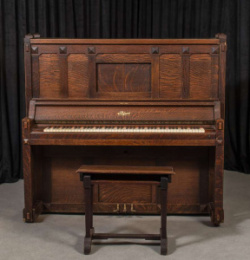 You Could Own An Upright Piano

You could own an upright piano

And although I can’t play one

The words got messing with my head

We had one when I was a young boy

It stood in the front room, unused

Because no one in our house could play it

So it left all our visitors bemused

Well – actually – I could play ‘Chopsticks’

And my grandad could play but he wouldn’t

And the woman next door could bang out a tune

But my dad said that really she shouldn’t

It  came with a stool made of wood

That had a hinged seat that would hide

sheets and sheets of sheet music

Kept pristine and un-flicked-through inside

Despite the fact that it was unplayed

For some reason my parents went out to find

A tuner who could tune it correctly

And unbelievably that tuner was blind

We used to see him each Friday

Getting onto the number ten bus

He was as able as anyone sighted

Paid his fare and seated with minimum fuss

But for some reason he frightened

Me and my brother somewhat

The way that he cocked his head listening

Seeing through you though we knew he could not.

All this came back to me briefly

When I spotted the newspaper ad

For a moment I wanted that piano

Even though I knew it was only a fad

I had visions of playing it honky-tonk

In a pub if I saw one by accident

I would overcome my nerves and be brave

I fantasised sitting at my piano

And playing a melancholy tune

Something by Elton John maybe

Or a Cole Porter song I could croon

I was abruptly dragged from this daydream

By my wife looking over my shoulder

Or you won’t be getting much older’

That wouldn’t have stopped me normally

Two guitars that I can’t get a tune out of

And a tin whistle – damning evidence of that

But the one thing that stopped me eventually

Had nothing to do with her threat

Two Grand for an upright piano!

It brought me out in a cold sweat.

So I didn’t succumb to temptation

And unlike that piano my parents once had

It won’t stand gathering dust in the living room

And a little piece of me is sad.

We Never Suspected A Thing ►

We had an upright piano for a while so that my kids could learn to play. But they soon got distracted by other things and so it just became a dumping ground for all our stuff.
Great poem Ian which I think will evoke numerous memories for any number of folk
Hope you are keeping safe
Nice one mate

What a tune you played with your own special instrument here Ian.

A great poem to remind me of my happy childhood banging on the black and white keys trying to get my racket to sound somewhere near the harmonious music teachers. Miz Rose from Constitution Hill.

She would always make me wash my hands before she would lift the lid to expose the bright shiny ebony and ivory.

So thanks for the memories mate... and the huge smile!

This brings back memories for me too.
I recently bought a four-hole Ocarina - poor substitute but only 7.99