The day after yesterday and the day before 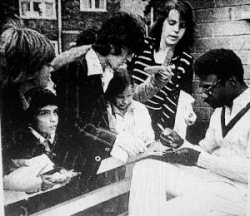 The past is held in the un-cut clearing
all the way to the other side of the cricket ground
and past the greenhouse
which you reckoned must have had a few balls
smashing through it over the years
and the nearby college,

drawing a line between the future
and what lies beyond the other side of the gate
leaving nothing but shadows
and rattling doors
of the boarded up club house
retracing footsteps to previous generations.

causing him to drop a Guinness he chuckled
when Lloyd walked off with a huge smile
and sat at the corner of the bar afterwards
once the match was finished
with the dusk whispering in the shadows
after he had autographed literally everything,

immortalising the most minor of memories
staggering home to a clip around the earholes drunk
at three in the morning off his long passed away mum
when the world was brought to its knees decades later
pulling unexpected moments like shields in his memories
almost like it was the only thing that could protect him now.

A Haiku about returning to the beaches when it is safe to go there again. ►

Thanks Nigel. I found out about this story by chance the other day. Amazing stuff,

An autograph signed
clubhouse now closed
but this cricket memory
will live on forever.