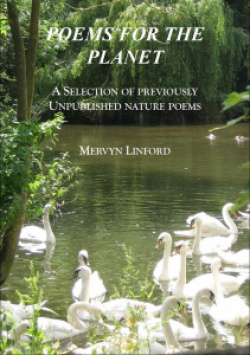 Mervyn Linford has been writing poetry and prose for nearly 50 years. He has had work broadcast on local and national radio and has been a featured poet at festivals in Essex and Suffolk. His publications include 11 collections of poetry, and four volumes of autobiography.

Poems for the Planet is an A4-sized book containing a generous selection of previously unpublished work amounting to about 450 nature poems spread across 196 pages. All the poems in this volume were written over the last few years. There is quite a bit of experimentation with the way the poems are presented on the page, particularly with regard to line length and indenting, but the size of the book easily accommodates Linford’s long lines. In his foreword, Linford tells us that “these poems are in praise of photosynthesis and our incredible blue planet, they are a celebration of our landscapes, seascapes, loves, lives, hopes and aspirations”.

Glancing through the contents pages, poems with titles such as ‘One Chaffinch doesn’t make a Swallow,’ ‘Larksong and the Light’s Pulsations,’ and ‘Hot Line to a Cold Heart’ are playful and intriguing.

Whether he is writing about “‘a bib of blizzards in November,” “clouds scumbled by the moon,” or “yellowhammers [that] stretch their slow syllabics along the lane / from Lavenham to Melford” Linford is a poet who responds to nature and “the signs of the spoken weather”. Often philosophical, he conveys thought and emotion through the use of metaphor which is consistent within each poem. Liturgical, seasonal, astronomical and meteorological imagery are his most frequent modes of expression. The opening lines of ‘Mystery’, for example, are a near-echo of the proclamation of the Mystery of Faith which forms a part of the Liturgy of the Eucharist:

the sun has risen –

In ‘Words to Remember’ Linford sets out his own poetic intentions: “We must find a way…to say [something] that’s not quite formulaic … this is where the climate and the stars / state their own proposals unconstrained / by human voices.”

Linford’s poems are always well-researched. An inveterate cloud-watcher, lifelong fisherman and observer of nature, he knows his subjects inside out. Occasional footnotes accompanying the poems yield some fascinating information such as the different ways of counting sheep in Lincolnshire or the fact that rainbows are formed by the prismatic effect of light hitting raindrops at 42 degrees.

Most of the poems are set in the rural counties of East Anglia, especially its coastal landscape where he draws upon the appeal of mudflats “slick with the oily sheen of iridescence” but others range as far afield as the Bay of Biscay, Casablanca, the Canary Islands, Lisbon and Dieppe. He is equally at ease writing about a sunset in the Gulf of Morbihan or Vigo Bay on Boxing Day as he is about spotting porpoises in the Channel or describing a chance encounter with a fallow stag at 3am in a Suffolk lane. The conversational style of these poems draw the reader into the narrative and is one of Linford’s strong points. His more serious moments are counterbalanced by his innate sense of humour found in poems such as ‘Pivotal,’ ‘Swans without a Lake,’ and ‘Moving North.’

To give readers an example of his style of writing, here is ‘Peonies’ in full:

Peonies, perfection but far from permanent,

The wind with a Maytime whisper or a doubt

as the petals scatter.

Where is the Beltane fire -

the dew that beautifies?

The orange tips, like flakes of the setting sun,

float as they flare and flickers through the shadows

Reading this poem, it quickly becomes apparent that this is not so much a description of the plant but more an attempt to grasp at something that is essentially intangible. The elusive quality of much of his poetry is what makes it so visionary and reflective.

This book will appeal to all who think deeply about the world we live in and care about our increasingly fragile environment. Recommended.