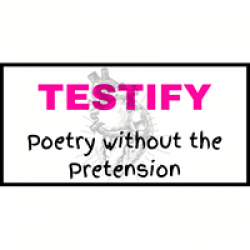 Last week we mentioned that earlier this month a virtual poetry night in Chester was visited by five poets from Manila in the Philippines. It was 2.15 am their time when they arrived - so they must have been keen. It’s a wonderful example of poetry without frontiers or borders in this time of lockdown. We wanted to know more, so we spoke to organiser Debz Butler, of Testify.

She told us that the Filipino poets had been invited along, with permission, by a poet called Lakan who had read at Testify’s first virtual open mic in April. She said: “They were all Filipino but they performed their work in English. The work was incredibly powerful.” Confirming that they turned up and read from 2.15 am onwards, Manila time, she added that it was “a dedication I’m not sure I could match!

“They were very well received. They shared some really moving work but also, they responded and encouraged others on the call. They really added to the atmosphere.“

Debz works as a nurse and has had poems published in the recent NHS anthology, These are the Hands. She said: “I’d been really worried that Testify would get lost in the virtual night scene but we’ve had lots of people join us who otherwise wouldn’t have been able to. It’s an unexpected benefit of being in lockdown and virtual. That being said, I miss our physical nights very much.

“I’ve been running Testify for two years. It’s based in Chester at Hanky Panky Pancakes on the first Tuesday of every month. My first ever time at an open mic night was at Sale Write Out Loud and I loved it.  I started going to more and more events in Manchester but wanted something a bit closer to home. The only group in Chester at the time was Chester Poets but I could never make a Thursday night due to childcare. After a while I decided to try running my own and Testify was born.

“I’ve tried to run it like the open mic nights I love and by that I mean, making it an open, supportive space. I know a lot of new poets feel very intimidated by open mic but we all have to start somewhere. Sometimes your piece will go down well, sometimes it’ll bomb. We’ve all been there but at Testify, we’ll always welcome you back.”

Sounds like our kind of open-mic night. Keep up the good work, Debz!

'All his calculations secretly yearning away from algebra' ►