Competition closes in 14 days, 22 hours. Get details and Enter. 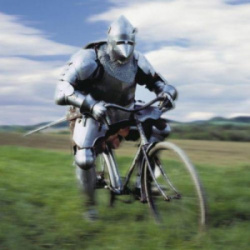 I wasn’t quite there yet

So this story is told second hand

Of the bravest and noblest knight

To ever gallop over this land

He was sitting quietly at home

When a neighbour just down the street

Knocked on the castle door

To advise him to get on his feet

A princess in need of his help

Had called out his name in the night

Beseeching him to tarry not

But get on his bike and take flight

So he rushed to mount his steel steed

Forgetting he’d been to the shop

And fastened tight to its frame

Was a  two shillings and sixpence mop

He didn’t have time to undo

The web of securely tied string

So he hopped in the saddle and rode

He was wary of the handle stuck out

In front of the bike as he rode

He swerved to miss those in the way

On footpath, dirt track and road

When he got there the legend it says

That his tyres were burning and hot

And his first-born child had arrived

And was lying serene in a cot

But my mother remembers all this

Not as a struggle or fight

But the day that my father arrived

thanks Po - definitely out of my comfort zone with this one

What a great rendition for day 17.