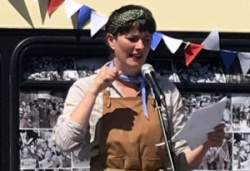 Pupils of Lily Lane primary school in Moston, Manchester, on Thursday marked the 75th anniversary of VE Day with an event in which poetry was well to the fore. At the livestream event the school’s poet in residence, Louise Fazackerley, read poems including one about the wartime Land Girls - she was wearing the right attire - and another about the contribution of Afro-Caribbean nurses in the post-war formation of the NHS. The school headteacher, Julia Clark, said: “The children had been learning songs and dances at home through teaching videos and joined in on the day. We estimate over 500 people followed us live, sending in their own messages and hearing ours. We have already had 1,500 hits on Facebook.”

'Idaho russets and Yukon Golds, reds and whites and yams' ►

Young Write Out Loud » Don't fence us in! Poets prompt pupils at the Giant Poetry Party

Young Write Out Loud » Calling all primary schools and children at home - roll up for a Giant Poetry Party today!

Brilliantly done, all at Lily Lane, and especially the inimitable Louise.