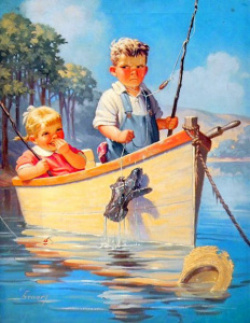 Flames raged in the cornfields around it,

Bobbing there in stagnant waters

With a thick, coarse rope.

Each spark from the furnace

A risk to its rotting timbers

As it took hold and smouldered

And smoked and spread

Oars crossed and laid on its floor

And the spattered markings of crows

On the grey decaying wood

The creak and groan of age

And gentle tugging against restraints

To be as one with the flowing river

That caressed against its sides

Then the rains came and doused the fires

And half-filled the ash-coated boat

With a fresh, cleansing downpour

That threw steam into the air at first

He returned across the charred fields

Blackened by the plague of fire

And with a silver knife

Sliced the rope that bound ‘Freedom’

It eased gently out into the river’s flow

Until a smooth current pulled it away from shore

And it drifted away into the mist

It was at it’s life’s end anyway

But did not want to go that way

And cremated where it lay a prisoner

This was better, this was a hero’s death

Adrift on water where it had served

Free at last of earthly toil

No human hands steering its path

The old man with the silver blade

Claimed back by nature

To be shattered on some distant bank or shore

The only evidence of their parting

The old rope, cut and fraying

And the memories of a little boat

And a boy fishing